Board of Trustees for the “Knowledge Award” Holds First Meeting, Approves General Policies and Application Process 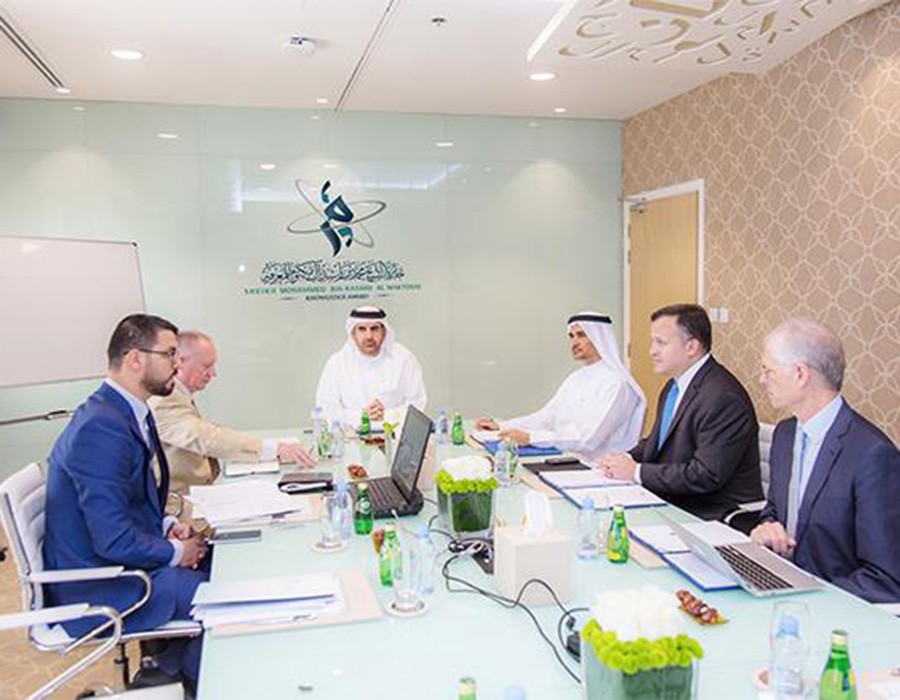 The laureates of the Award are set to be revealed during the Knowledge Summit 2016, organised by the Foundation on December 5-7, 2016, at the Grand Hyatt Dubai hotel.

The meeting - chaired by His Excellency Jamal bin Huwaireb, Managing Director of MBRF, Vice Chairman of the Board of Trustees and Secretary General of the Award - was attended by Members of the Board, Nick Rawlins, Professor of Behavioural Neuroscience at the University of Oxford; David Bennett, Vice President, Global Corporate Partnerships at National Geographic; Dr. Ali Ahmed Al Ghafli, Vice Dean for Social Sciences at the College of Humanities and Social Sciences, UAE University; Alexander J.B. Zehnder, Visiting Professor and Member of the Board of Trustees of Nanyang Technological University (NTU), Singapore.

The Award’s main objective is to galvanise the shift towards a knowledge economy in the UAE, the region, and the world, as well as to establish a culture built on exchanging knowledge and honouring intellectual and creative achievements that serve to produce and disseminate knowledge.

H.E. Jamal bin Huwaireb said: “The Mohammed bin Rashid Al Maktoum Knowledge Award seeks to raise awareness about the importance of spreading knowledge as a means to achieve sustainable development by honouring the pioneers working to revolutionise the knowledge industry.”

H.E. bin Huwaireb went on to explain that the Award – handed to the laureates by His Highness Sheikh Mohammed bin Rashid Al Maktoum, Vice President and Prime Minister of the UAE and Ruler of Dubai – builds on the international momentum created by the Knowledge Summit since its first edition back in 2012. The Summit is the most prominent event of its kind in the region. What is more, the Award reflects the determination of the Emirate of Dubai and its ruler to honour intellectual achievements around the world, especially those that stand to procure benefits for the people.

The Board of Trustees will hold a series of executive meetings to determine application requirements and selection criteria for the laureates, H.E. bin Huwaireb revealed, as well as to prepare for the Award ceremony, set to be held during the Knowledge Summit 2016.

Meanwhile, Dr. Ali Ahmed Al Ghafli, said: “Not only does the Mohammed bin Rashid Al Maktoum Knowledge Award carry the name of a great leader, but it also rewards knowledge, which makes it a true embodiment of the UAE’s approach to leadership.”

Dr. Al Ghafli went on to explain that the Arab World played a pivotal role in spreading knowledge in past centuries, when the capitals of knowledge were dispersed throughout the Islamic world. The Award places Arabs back on the right track to reclaim that commendable history, he added.

For his part, Professor Alexander J.B. Zehnder, lauded the Award, noting that it would benefit all of mankind, raising people’s awareness regarding the role that knowledge plays in their lives and, consequently, motivating them to participate in the creation and dissemination of knowledge.

“The Mohammed bin Rashid Al Maktoum Award is just as important as the Nobel Prize,” Prof. Zehnder added, recalling the immense intellectual contributions that the Arab World has made since ancient times, which still influence the field of knowledge today.

Continuing on the same note, David Bennett said that the award is an important initiative for honouring those who contribute to the dissemination of knowledge, making it available to people everywhere; the award is a source of inspiration to many, motivating them to exert even more efforts in the field of knowledge.

Professor Nick Rawlins, meanwhile, said that the importance of the Award stems from its role in underlining the key role of knowledge and science. He pointed out that the University of Oxford has extensive experience in evaluating contributions to the field of knowledge and will, therefore, play an active role within the Board of Trustees.