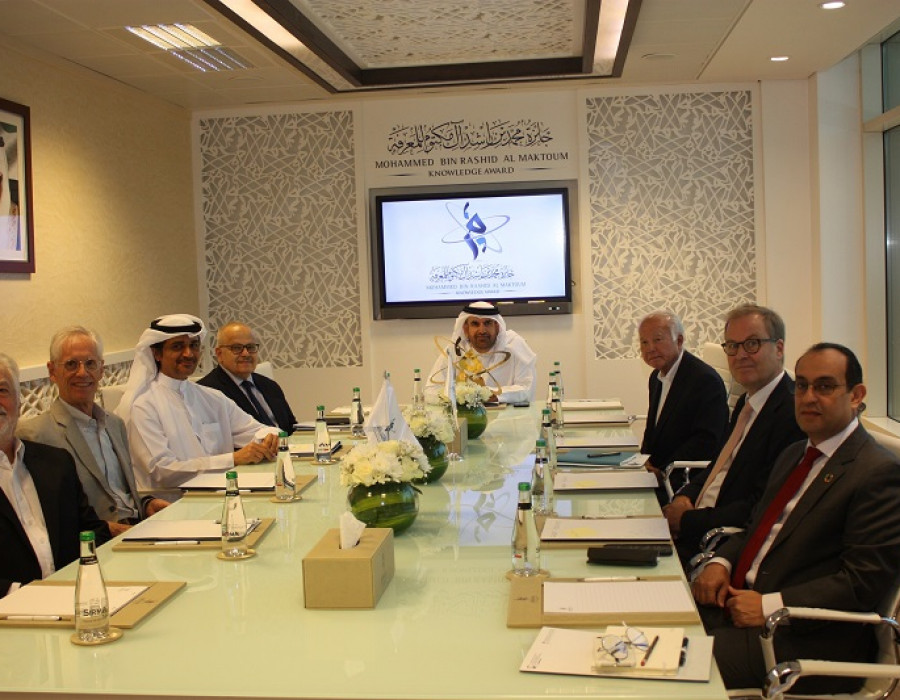 On December 6 and 7, the Mohammed bin Rashid Al Maktoum Knowledge Foundation (MBRF), in collaboration with the United Nations Development Programme, will host the Knowledge Youth Forum events as part of the celebration. Held at the Award’s headquarters in Dubai, the meeting was chaired by HE Jamal bin Huwaireb, CEO of MBRF, and in the presence of the members of the Council: Dr. Ali Ahmed Alghafli, Vice-Dean of the College of Humanities and Social Sciences at UAE University; Dr. Mohamed Osman Elkhosht, President of Cairo University; Professor Alexander Zander, Member of the Board of Trustees of Nanyang Technological University, Singapore; and Professor Kazuhiko Takeuchi, Director and Professor of Integrated Research System for Sustainability Sciences at the University of Tokyo Institutes for Advanced Studies. Also participating in the meeting were members of the Board of Advisors: Professor Nick Rawlins, Professor of Neuroscience and Vice-Chancellor of the University of Oxford; Dr. Olof Amlin, former Director of the Nobel Museum in Sweden; and Dr. Hani Turki, Director of the Knowledge Project at the United Nations Development Programme.

The trustees considered the shortlist of people and organisations that, in accordance with the advisory committee's recommendations, met the requirements for the award and contributed significantly to advancing the global production and dissemination of knowledge. The trustees developed an ultimate shortlist of applicants. The discussion also focused on the organisational components of the prize and emphasised its accomplishments in previous years, since it has been garnering much attention and admiration in the worldwide knowledge scene due to its role in fostering knowledge innovation.

HE Jamal bin Huwaireb reaffirmed the honourable standing that the award has attained among the international honours given to knowledge pioneers whose inventiveness and contributions to knowledge have had a strikingly good influence on the lives of people. He also commended the broad involvement in the award and the widespread attendance of the world's most illustrious figures and organisations engaged in business, production, and information dissemination.

HE added: “Inspired by His Highness Sheikh Mohammed bin Rashid Al Maktoum, Vice President, Prime Minister and Ruler of Dubai, the Maktoum Knowledge Award establishes a knowledge economy and constructs advanced and sustainable societies that can keep up with the demands of the future. It strives to establish creativity and innovation and improve pathways for the transmission, dissemination, and development of information around the world. In order to pick the winners in the final stage and announce the winners, the Board of Trustees of the Award is eager to thoroughly review the applications for candidacy and examine the knowledge offerings of the candidates from individuals and institutions during this stage. The felicitation ceremony is scheduled to be held on December 6, 2022.”

Initiated in 2014, the Mohammed bin Rashid Al Maktoum Knowledge Award. recognises the world's knowledge pioneers and highlights their most notable accomplishments and contributions in a variety of academic disciplines. The prize is worth USD 1 million and covers a wide range of topics, including knowledge, innovation, leadership, and creativity, as well as the advancement of academic institutions and scientific research, as well as communication technology.