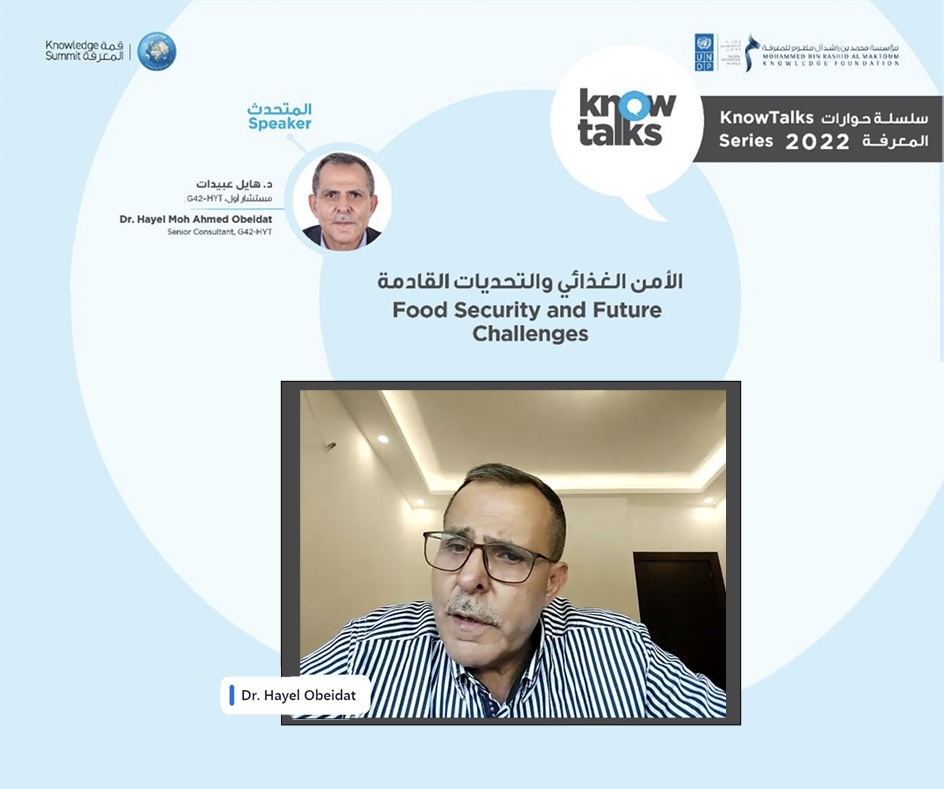 24 August 2022 – Several pressing issues were discussed during a session titled “Food Security and the Future Challenges”, organized by Mohammed Bin Rashid Al Maktoum Knowledge Foundation (MBRF) in collaboration with the United Nations Development Programme (UNDP) as part of KnowTalks series. The session saw the participation of Dr. Hayel Obiedat, Senior Consultant, G42-HYT, who highlighted the challenges that food security is facing in the Arab region and the world.

Dr. Obiedat emphasized that there are significant issues with global food security, particularly for the 854 million people who live in developing nations and account for 18 per cent of the worldwide population. Asserting that the negligence of some countries towards agriculture and the agricultural land raises concerns about food security in the Arab and around the world, he said that food security is a pillar of stability and overall security.

The Senior Consultant stated that the food problem is a humanitarian tragedy, as hunger and malnutrition cause millions of deaths every year, while medical expenses relating to malnutrition in developing countries are estimated at USD 30 billion every year. “Many countries around the world are suffering from an increasing gap between local food production and increasing consumption as a natural result of population growth,” he pointed.

During the session, Dr. Obiedat further discussed the factors contributing to the escalation of food safety and security challenges, such as increasing population growth, limited natural and agricultural resources and their misuse, transformations in food patterns, climate change, in addition to the challenges faced by the food manufacturing industry.

Stating that the challenges of food security are not limited to one country, he emphasized the importance of coordination and concerted efforts among all countries in addressing this global phenomenon. He also advocated for advancing innovation in the food sector and adopting more effective and sustainable methodologies for managing crop irrigation and food production.