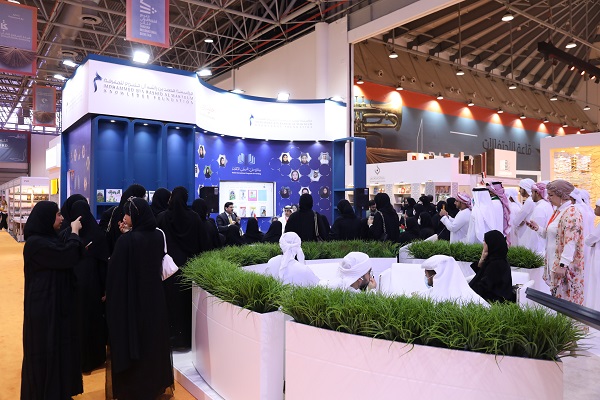 08 November 2022 - The Mohammed bin Rashid Al Maktoum Knowledge Foundation (MBRF) held various knowledge activities as part of its Dubai International Program for Writing initiative and ‘Knowledge Lounge’ projects, at the 41st edition of Sharjah International Book Fair 2022. The book fair is being organized by the Sharjah Book Authority under the theme ‘Spread the Word’, from November 2 to 13, 2022, at the Expo Centre Sharjah.

During the third day of the book fair, MBRF organized a workshop for the Translation Club under the Dubai International Program for Writing, one of the innovative strategies that promote the intellectual and literary movement both globally and regionally. The foundation also hosted a session on ‘Stories and Storytellers’, which included the participation of Huda Hamed and Eman Alyousuf. Hamed stated that even the simplest folktales must be presented as a piece of work with a unique narrative approach or style. Grandmothers reciting stories for their grandchildren are all a thing of the past and the younger generation are no longer attached to these long-forgotten customs. She further explained that writing is a mission that requires patience as well as persistence, despite all the challenges that one may encounter in her/his journey, emphasizing that knowledge is connected to a person's drive to learn what they truly want. She also asserted that nothing can be created from nothing. For a writer to be able to grow and refine his skills, there must be an innate talent. A book signing event for the translator Manar Abu Alyoun's book, ‘The Self-Discipline Blueprint’ was also hosted by MBRF.

Along with these, MBRF also organized a session themed ‘The writing industry: Workshops and programs’ as part of the ‘Knowledge Lounge’ projects, which was attended by Dr. Jamal Muqabla, Islam Abu Shkeir, and Hussein Darwich. During this session, Dr. Jamal highlighted that without talent, desire, and an innate will to grow, we can never create writers. According to him, writing is the most important human activity, with its underlying criticism being impressionistic and artistic. But with the advancement of technology, there has been a shift in thinking, with effective criticism now seen as what separates the arts and science.

Mr. Islam Abu Shkeir highlighted the significance of the Dubai International Program for Writing workshops, in developing the creative writing skills required to producing a great creative book or a literary piece. An industry is related to abilities, resources, and skills that one acquires over time rather than being innate. As a result, we cannot expect to produce good writing without the desire and mindset to master it. He also emphasized that skill is the primary requirement for writing and that it must be developed through extensive and general reading. Therefore, it is not confined to the literary genre of the work itself. It is important to keep in mind that a story alone does not produce a novel, rather, a novel is the product of a story and has evolved from it.

On the fourth day of the book fair, MBRF hosted two panel discussions – ‘Translation as a talent and art’ and ‘The youth writes: When the story is a novel’ – as part of the Dubai International Program for Writing. Taleb al-Refai, the novelist and short story writer, stated that the story's journey begins with a spoken word and ends with writing. A short story is based on one big event in one temporal setting, whereas a novel is based on numerous events in various temporal settings. Dr. Najwa Barakat highlighted that as young writers do not always select the true story, it is our responsibility as trainers to refine their thoughts to find the right one.

Furthermore, MBRF organized another session titled ‘Academic translation and the issue of a reader’, as part of the ‘Knowledge Lounge’ initiatives, which was attended by Sabah Dibie, Eman Al Hamadi, Dr. Abdul Nasser Yusouf, and Kenan Harb. Dr. Abdul Nasser Yusouf pointed out that literary translation relies on the mastery of the translator in literary criticism. Translated works always possess the true sense of the text. Literary texts contain numerous connotations and symbols that, when translated into another culture, might be against its conventions. According to Sabah Dibie, stories and novels are more often considered literary translations than poetry translations, and a translator must research thoroughly to understand the expressions that they are allowed to translate into different cultures.

The fourth day also featured a book signing ceremony and panel discussion for the book ‘When the class door is closed’ by Dr. Karima Al Mazroui, which was attended by Dr. Hanada Taha. It also included a seminar on the book ‘Learning how to learn’ by the translator Eman Samir Al Mutwali.

His Excellency Jamal bin Huwaireb, CEO of MBRF, said: " MBRF is committed to effectively participate in significant fairs which aim to attain more knowledge, literary, intellectual, and academic achievements, in line with its objective to promote knowledge movement. We are pleased to participate in the 41st edition of the Sharjah International Book Fair, the leading knowledge event that has maintained its position among the world's major book fairs and events for over 40 years.

Bin Huwaireb indicated that one of the main pillars of the MBRF's initiatives for the third and fourth days of the fair is developing the prospects of translation. This is consistent with the value of translation in transferring scientific knowledge, closing the knowledge gap, and bolstering the channels of knowledge and civilization networking. His Excellency also stated that more than 182 publications and 20 seminars were produced through the Dubai International Program for Writing. Decides, the Translation Club also provides its members with the opportunity to oversee and evaluate the quality of translations, workshops, and lectures, as well as introduce them to publishing houses to publish their works.

The Sharjah International Book Fair is one of the biggest and most renowned book fairs in the region as well as the world. The fair includes a vast array of intellectual and knowledge productions along with several publications, providing a forum to interact with authors and creatives in the artistic fields. It also offers the opportunity to forge partnerships between publishers and knowledge institutions on both the Arabic as well as global levels.