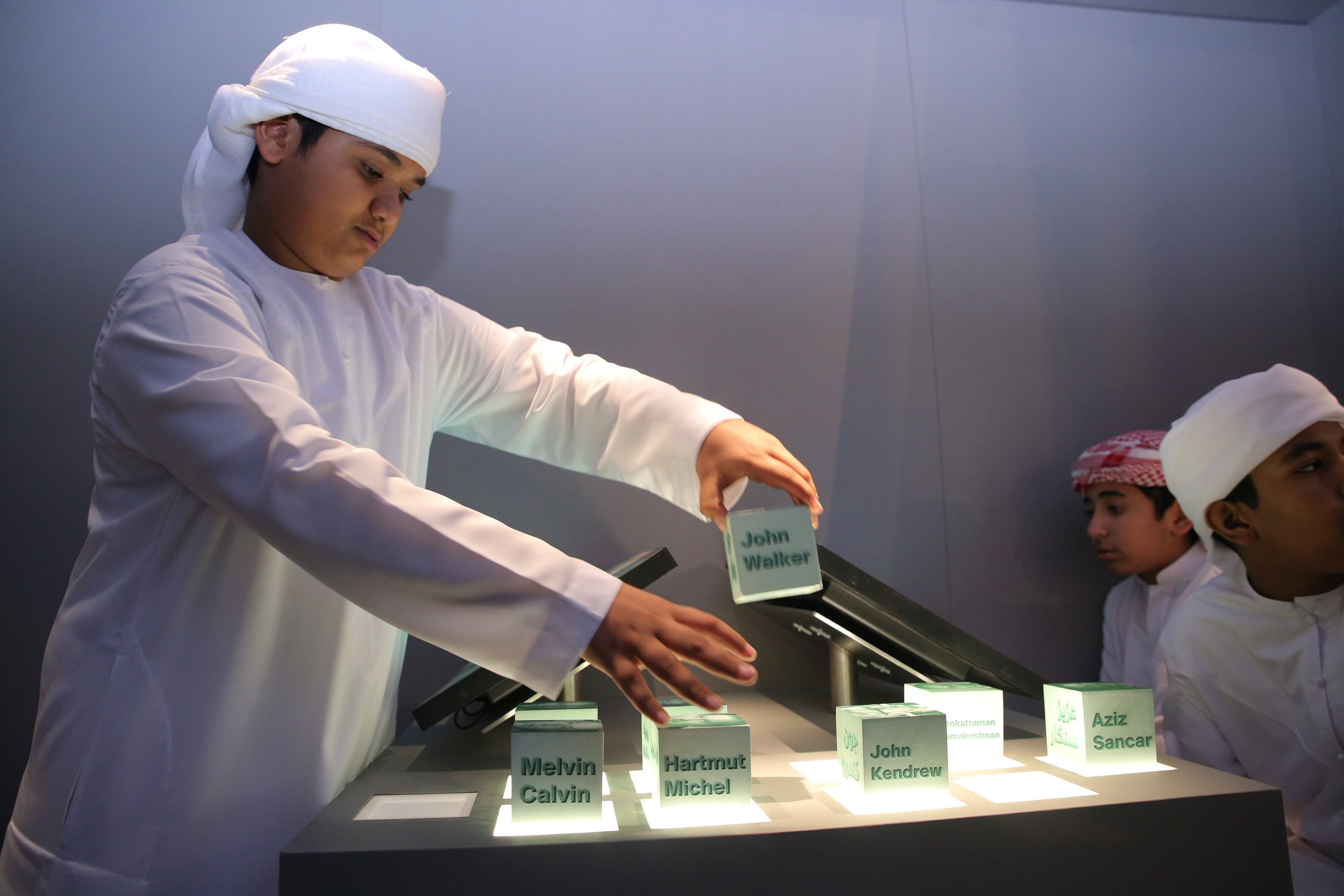 Held under the patronage of MBRF Chairman His Highness Sheikh Ahmed bin Mohammed bin Rashid Al Maktoum, the 2019 edition of the Exhibition bears the theme “Nobel Prize for Literature: Sharing Worlds – In Memory of Naguib Mahfouz”.

The Nobel Exhibition 2019 sheds light on an important category of the coveted prize – literature. It showcases the success stories of some of the most prominent laureates in the sector, as well as their most significant accomplishments. The Exhibition focuses on all forms of literature, including poetry, theatre, and cinema, highlighting the Nobel Prize’s progress over the years. It particularly highlights the career of renowned Egyptian novelist Naguib Mahfouz, the first Arab to win the Nobel Prize in Literature, showcasing his works, which enriched Arabic Literature and were adapted to the screen – cinema and television – to great success.

MBRF’s CEO His Excellency Jamal bin Huwaireb asserted that the Nobel Exhibition continues to enhance the Foundation’s role in the knowledge sector, shedding light on some of humanity’s greatest creations in literature, which facilitates the production and dissemination of knowledge, as well as the establishment of knowledge societies and driving forward the sustainable development process in all of our communities.

“With the Nobel Exhibition, we are echoing the UAE’s strategic objectives to promote innovation and creativity among all segments of society – particularly, the youth and students – empowering them to become productive members of their community,” H.E. added. “Organising the Nobel Exhibition in the Emirate of Dubai every year reflects the Nobel Foundation’s faith in the Emirate and in MBRF’s ability to host such a large-scale event, and set an agenda that attracts large audiences and lives up to the expectations of knowledge enthusiasts.”

“The Nobel Prize Museum has the ambition to reach out to a young audience world wide and inspire people to get engaged in the areas in which you can receive a Nobel Prize. These prizes are handed out in the spirit of Alfred Nobel who claimed that the laureates should have done a fantastic achievement “for the benefit of Humankind”. Laureates like Mahfouz and others are great role models, and inspire us all through their writing. It’s an honour for the museum to be able to present our fifth exhibition in Dubai. We have created a playful entrance to the world of literature, books and everlasting stories!”

The Nobel Exhibition 2019 consists of 8 sections, each focusing on a specific topic. The “Peace” section introduces visitors to selected novels written by Nobel Laureates in Literature and that have war and peace as their theme, whereas the “Human Condition” section poses questions about what it means to be human and showcases novels addressing the subject. The “Fairy Tales” sections allows visitors to the Nobel Exhibition 2019 to explore renowned works by Laureates that are inspired by fairy tales. Meanwhile, the “Life” section explores the fragility of life as a theme in selected novels.

Furthermore, and in keeping with the UAE’s initiative to name 2019 the Year of Tolerance, this year’s Nobel Exhibition offers a “Tolerance” section, showcasing creative works by Nobel Laureates in Literature that have tolerance as their theme. This while the “Family” section explores novels that tell the story of a family, allowing visitors to familiarise themselves with the books and their authors. The “Love” section sheds light on one of the most prominent themes in literature, while the “City” section showcases works by Naguib Mahfouz and other Laureates who wrote novels with themes revolving around cities.

On another note, the Nobel Exhibition 2019 hosts a series of activities, including 4 weekly workshops, led by prominent experts from the Nobel organizations, in addition to a series of poetry nights featuring renowned poets from around the world, set to be held in various locations around the Emirate of Dubai.

The Nobel Exhibition’s first edition took place in 2015 under the theme “The Nobel Prize: Ideas Changing the World”; it consisted of five sections that introduced visitors to the prestigious Nobel Prize and its categories, as well as to its Founder Alfred Nobel and his inventions, and a brief historic overview covering the Nobel Laureates and their achievements. In the 2016 edition, the Exhibition was titled “Exploring Life: Nobel Prize in Physiology or Medicine”, marking the first time that the Nobel Exhibition dedicated an exhibition to the medical field, focusing on the contributions of Laureates in areas such as the treatment of chronic diseases and shedding light on the contributions made by Muslim scientists in the medical field.

The third instalment in 2017 bore the theme “The Nobel Prize in Physics: Understanding Matter”; it highlighted the discoveries and scientific accomplishments of Nobel Prize Laureates in Physics, becoming the first exhibition of its kind to focus on physics. The Nobel Exhibition 2018 was titled “The Nobel Prize in Chemistry: Connecting Elements”, focusing on the achievements of Arab and Muslim chemists, who played a key role in establishing the foundations of this science, in addition to shedding light on the discoveries made by Nobel Prize Laureates in Chemistry, underlining the role chemistry plays in developing key sectors such as medicine.