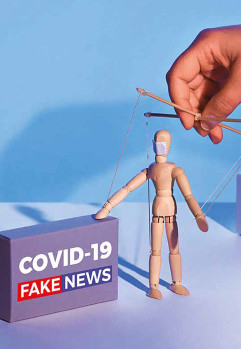 COVID-19 and the Social Media: How Authentic is the Information You’re Consuming?

Coronavirus disease (COVID-19) is the first major pandemic to attack the human race in the social media age. Because of its on-time ability to disseminate information, many entities – both public and private – use social media to spread vital information, the same way as misinformation is spread through social media bots.

Misinformation and disinformation are among the major challenges that the World Health Organization (WHO) has faced in its efforts to contain the pandemic that broke out in December 2019, in China’s Wuhan city.

But as the pandemic continued to sweep across the world, causing shutdowns, social media became more important than ever before.

Facebook, Instagram, and Twitter, among other platforms, became the meeting point for friends and family who could no longer meet in a public park, cinema, or place of worship. As we retreated to the social media for timely updates, conspiracy theorists found a window to misinform and disinform.

«The exact scale of misinformation is difficult to measure» wrote Ryan Ko, chair professor and director of cybersecurity at the University of Queensland, Australia in an April 1, 2020 article published by The Conversation, a network of not-for-profit media outlets that publish news stories written by academics and researchers.

Misinformation, Ko noted, can be felt through snapshots of Twitter bot involvement in COVID-19-related hashtag activity.

By monitoring activity on Bot Sentinel, a website that uses machine learning to identify potential Twitter bots, using a score and rating, Ko discovered that on a single day; March 26, 2020, bot accounts were responsible for 828 counts of #coronavirus, 544 counts of #COVID19 and 255 counts of #Coronavirus hashtags within 24 hours.

According to his analysis, these hashtags respectively took the 1st, 3rd and 7th positions of all top-trolled Twitter hashtags.

Ko stated further that the actual number of coronavirusrelated bot tweets are likely much higher, as Bot Sentinel only recognizes hashtag terms such as #coronavirus, and wouldn’t pick upon «coronavirus», «COVID19» or «Coronavirus».

According to Santosh Vijaykumar, a health and risk communication researcher at Northumbria University, social media has changed the way society is responding to the COVID-19 outbreak.

«We’re seeing a worrying trend where specific behaviors triggered by fear and anxiety — such as loading up on toilet rolls or hand sanitizers — get normalized and further diffused because they are constantly discussed on social media» Vijaykumar told The TIME magazine.

The danger with disinformation and misinformation about outbreaks of epidemics like coronavirus is that it does not only generate fear and panic, but it can also make outbreaks worse by encouraging people to follow bad advice, according to a study by U.K. researchers, Julii Brainard and Paul R. Hunter.

The two researchers at the University of East Anglia, Norwich, England, used a simulation to model how the spread of information might affect the spread of different viral diseases. Their findings were that the spread of misinformation during a disease outbreak may make the outbreak more severe and that reducing the amount of harmful advice circulating by even a little bit could mitigate that effect.

«We are not just fighting an epidemic, we’re fighting an infodemic,» Dr. Tedros Adhanom Ghebreyesus, the director-general of the World Health Organization (WHO), told a meeting of foreign and security experts in Munich, Germany in February.

The alternative for WHO was to dispatch its team of «myth busters» to work with tech companies such as Facebook, Google, Pinterest, Twitter, TikTok, and YouTube, among others, to counter the misinformation and disinformation that had started to spread.

«When u sing s ocial media, m ake sure you’ve h eard o f the social media account before you share any piece of information» Wilfredo Lee, a photojournalist with The Associated Press, said.

The worst bit of it is that sensational content garners the most engagement on social media. It attracts more likes, shares and comments.

Journalist Alejandro de la Garza of the New York-based TIME magazine, quoting experts, wrote in a March 16, 2020 article that the unprecedented level of real-time information at our fingertips can both give us the tools we need to make smart decisions, but also make us more anxious about what is to come.

«Conversations around the coronavirus, especially those at the community level, can help us navigate this crisis,» Jeff Hancock, a professor of communication at Stanford University and the director of the Stanford Social Media Lab, said.

«When using social media,
make sure you’ve heard of
the social media account
before you share any piece of
information»

«Those discussions are «reflecting how society is thinking and reacting to the crisis... They’re allowing society to sort of talk its way through what is an unprecedented kind of threat» he added.

Engaging with the public

Social media is also used by scientists and other public health experts to directly engage with the public. That is how the WHO came up with the idea of sharing on-time information about COVID-19 through the social media messaging platform, WhatsApp.

But that hasn’t reduced the influence of disinformation because of the various motivators for people who spread disinformation. The major motivation is financial gain, according to the Global Disinformation Index (GDI), a U.K-based not-for-profit organization that works to disrupt, defund and down-rank disinformation sites on the internet.

However, some experts see a positive side to the social media generated fear, arguing that it could be just what the world needs to slow the spread of epidemics.

«A moderate level of fear-arousing sensationalism in such messages could increase user engagement. When such messages are combined with useful information that helps people protect themselves or diagnose symptoms, the combination can become a powerful and actionable health communication message, and result in wide sharing and engagement across populations,» Khudejah Ali, a fake news and disease communication researcher, told the TIME.

Without thoughtful strategies to prevent the spread of bad information, a lot could go wrong. Social media platforms continue to be dangerous socio-technical vulnerability in times of confusion and crisis. When information is scarce, opportunities abound for media manipulators to trade on chaos and fear.