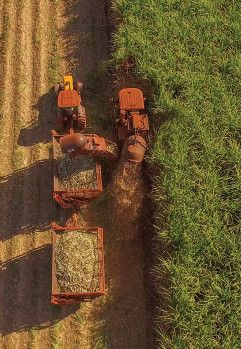 Between 2014 and 2018, Brazil jumped into second position among the biggest exporters of agricultural products to the 28-country European Union.

Brazil had a market share of 10.2 percent of all food exports to the EU, amounting to €11.9 million, according to the agri-food trade statistical factsheet published by the EU Commission’s Directorate-General for Agriculture and Rural Development.

The top food exporter to the EU is the United States with about €12.1 million over the same period.

By comparison, Brazil imported food products worth €1.7 million from the EU market, a testament to the significant shift that Brazil has made from importer to major world exporter in this sector.

It has been a 40-year journey that has seen remarkable investment in the agricultural sector which started in the 1970s with the founding of the Brazilian Agricultural Research Corporation (Embrapa) working under the Ministry of Agriculture, Livestock and Food Supply.

This is how Cerrado, a vast tropical savanna ecoregion covering the States of Goiás, Mato Grosso do Sul, Mato Grosso, Tocantins, and Minas Gerais, has seen massive investments that have greatly expanded the agricultural sector and consolidated the country’s agribusiness.

For more than 50 years, this region, because of its tropical savannah grasslands, was known for its beef production. The soils were thought to be not suitable for cereals production but with the introduction of biotechnology, it has developed into Brazil’s breadbasket since the 2000s.

Farmlands here cover an area of 200 million hectares, and because of the investments, crop production increased from 3 to 48 million tons between 1977 and 2014, while the number of beef cattle soared from 3 to 28 million heads, according to a study published by ResearchGate.

“To be able to make use of soil which had been considered useless soil for agriculture for 500 years was a game-changing innovation,” said Roberto Jaguaribe, President of the Brazilian agency for the Promotion of Exports and Investments (Apex-Brasil), as quoted in Farmers Guardian, a UK-based weekly newspaper.

In an interview published on Crop Life International ’s blogging platform, Adriana Brondani, Executive Director of the Brazil-based Council for Biotechnology Information, attributed the remarkable turnaround to the realization that Brazil had to develop production models tailored to its tropical climate.

“Forty years ago, best practices in agriculture were developed based on conditions found in temperate regions. These models were not suited to Brazil’s tropical climate, seasons, weather, and land,” Brondani said.

“As Brazilians farmers, we realized that we needed to develop our own model of farming that would work best here—and that included investing in technology and agricultural innovation. This customized Brazilian model of agriculture, which included a widespread adoption of biotech crops, has greatly increased our country’s production of food, fiber, and fuel,” she added.

The Food and Agricultural Organisation (FAO), the United Nations specialized agency that leads efforts to fight hunger, has reported that Brazil’s agricultural exports increased in 2017 to reach $96 billion.

With a vision of being “a modern and agile institution that promotes the strengthening of rural producers and the quality of agricultural products” the Brazilian government through its Ministry of Agriculture, Livestock and Food Supply has extended subsidies to farmers to the tune of $64 billion—or about six percent of the country’s budget.

According to the agricultural ministry website (www.agricultura.gov.br), under the government’s 2019/2020 Safra Plan, there are more financing options for rural producers.

“Some measures to improve access, increase the supply of credit and reduce financial costs will be implemented through a provisional measure: CPR in dollars, the Fraternal Guarantee Fund, Equity of Affectation and equalization of interest for cereals,” a statement on the ministry’s website reads.

This agricultural season, the sector will receive 225.59 billion Brazilian reals (about $58.65 billion) of which, 222.74 billion reals (about $57.91 billion) is for rural credit to fund marketing and industrialization.