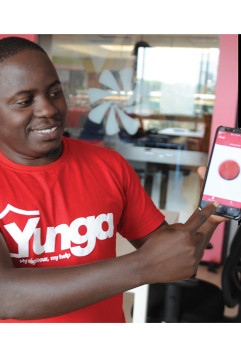 When his home country, Uganda, experienced a spike attacks on residences, 29-year-old Anatoli Kirigwajjo banged heads with two colleagues, Fredrick Kasoma and Nasser Kawesa, to come up with a computer-based security application to police their neighbourhoods.

The App, Yunga, has since been copyrighted by their company Yunga Technologies which is helping residents of a village on the outskirts of Uganda’s capital Kampala to monitor the security of their premises with a simple portable device that connects to their smartphones.

Their innovation won them $5,000 in seed capital and $25,000 in Amazon Web Services credits at GIST Tech-I, a global pitch competition for science and technology innovators funded by the United States State Department’s Global Innovation through Science and Technology Initiative. They received the award during the Global Entrepreneurship Congress held in Bahrain on April 24 last.

Can you tell us about your application and how you came up with the innovation?

Yunga is a local word, which means to join or connect. The inspiration for this innovation came from the community given that Uganda has about 43,000 police officers who have to watch over a population of over 40 million Ugandans. When you put those two figures together, you can see it is really very hard for the police to meet the demands of everyone.

We were hearing about instances of insecurity everywhere in the community, ranging from attacks on small retailers to big shops, residences etc, and it appeared that not enough was being done to respond to the situation.

Growing up, we were told that your neighbour was your first line of defense and that everyone near you could be the best person to give you security. So, operating in the digital space, that is how we came up with the innovation called Yunga, which is basically leveraging the power of the community to provide security to each other digitally.

So, what we have done is designing through science and technology a portable device that we can give to a community, say, of about five households, who install these simple devices. Then with a simple press of a button all those neighbours will be notified that you are under attack.

How does it work?

This App works on a network, meaning when you acquire a device from us, we connect it to your handheld device – it can be a smartphone or any feature phone. The advantage with connecting it to your phone is that even when you are away and your home is attacked, you can still be notified regardless of whether you are connected to the internet or not. That means that you don’t have to be at your home or business premise to respond to an attack.

This being a policing App, how have the Ugandan security agencies warmed to it?

Being at the initial stages, we haven’t reached out to many of them yet because what we wanted was to do first was create a standalone solution. But yes, we have been piloting our solution in the Kigoowa–Ntinda district in northeast Kampala and the police there have responded positively because they get a timely alert when there are any attacks in the area. But in the event that the police decide they are not willing to work with us, we should still be able to continue. That is why we have entered into a partnership with a private security company that can offer rapid responses on our behalf.

Are there any achievements to report to date? Are there any indications of a fall in crime rates in the area where you have been piloting it?

We started this pilot about two months ago. Before installation, when we first heard from our clients, they were telling us about how the security situation was in their area. They told us many sad stories of being attacked at night while they slept and having all of their household property stolen plus stories of physical and sexual harassment. But they have said that ever since we connected them, our dashboard hasn’t recorded any such attacks.

And since they are connected 24/7, we interact with them on a daily basis. The only issue we have detected is that when power goes off, the devices will not work. We are trying to solve this with our updated version, which will keep devices working even when the electricity goes off.

What are your future prospects?

We want to be a next generation community security company because it is not sustainable to pay $200 every month to hire a security guard. Very few Ugandans can afford this. But by acting collectively, at a small fee of about $3 each, they can be protected by drawing on their network and also have a rapid security response.