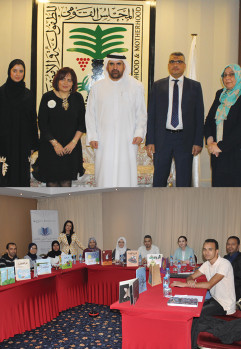 A delegation from the Mohammed bin Rashid Al Maktoum Knowledge Foundation (MBRF) has visited the National Council for Childhood and Motherhood (NCCM) in Egypt, to discuss ways of cooperation in the project of “Literacy Challenge” which launched by His Highness Sheikh Mohammed bin Rashid Al Maktoum, UAE Vice President and Prime Minister and Ruler of Dubai, in order to providing education opportunities for 30 million Arab youth by 2030.

The delegation was headed by HE Jamal Bin Huwairb, CEO of MBRF, who discussed with Dr. Azza El Ashmawy, Secretary General of the NCCM, the prospects for joint cooperation and ways of exchanging ideas and visions on the mechanisms of the “Literacy Challenge” project.

During the meeting, El Ashmawy briefed Jamal Bin Huwairib on some of the projects launched by the NCCM, such as the Pioneer Mothers Initiative, which was implemented in Fayoum governorate. It aims at empowering the families educationally, culturally, socially and economically in coordination with all government agencies supporting the rights of children and mothers. He praised the importance of this initiative, and called for the need to circulate to some governorates of Upper Egypt in cooperation with the MBRF.

“His Highness Sheikh Mohammed bin Rashid Al Maktoum’s initiatives are based on humanitarian aspects that aim at empowering people everywhere and helping them to make the best use of their abilities and qualifications. This work is part of the UAE’s strategy of building bridges of cooperation and building excellent relations with various countries in the world.” Jamal Bin Huwairb said about this visit. He added: “The aim of MBRF is to partner with the NCCM and various government agencies in Egypt for unifying efforts to eradicate illiteracy. MBRF will also participate in the dissemination of the Pioneer Mothers Initiative launched by the NCCM in Fayoum Governorate, In Upper Egypt, and gradually move to the rest of the governorates, which is witnessing a marked increase in the rate of illiteracy.”

The “Literacy Challenge” project seeks to compensate for the loss of formal education opportunities, and will serve as a tool to narrow the gender gap in education and achieve education for all.

The NCCM is implementing a number of awareness campaigns, including awareness-raising seminars and panel discussions on issues such as the issue of dropout and the Pioneer Mothers Initiative, which include literacy, moral support and health education.

The first training session of a children’s literature workshop in Morocco has concluded. The workshop is an initiative of the Mohammed bin Rashid Al Maktoum Knowledge Foundation (MBRF). The workshop builds on the success of the Dubai International Program for Writing, a p rogram that fosters A rab innovators a nd takes place in several countries including Egypt, Kuwait, and Tunisia. The children’s literature workshop will last for five months, with 10 trainees participating.

The first session, supervised by Dr. Wafaa Thabet Al- Mazghani, examined the different styles of writing for children, especially works written with early childhood and preschool readers in mind. Participants learned about the most important narrative techniques used in story writing and were given reading materials to prepare them for the second session.

According to His Excellency Jamal Bin Huwairb, CEO of MBRF: “The Dubai International Program for Writing has successfully reached talented and creative writers in diverse fields of knowledge and literature across multiple Arab countries. MBRF provides them with a solid foundation and a nurturing environment where they can refine their talents and literary productions and present them to the world. This in turn will develop the Arab canon of literature and promote the intellectual output of the children of the region.”

His Excellency added that the program would continue expanding into new countries and regions in the coming years with the goal of placing Arabic literary works at the vanguard of the world’s most esteemed literature. “The workshop in Morocco is an important milestone for the Program, highlighting as it does the importance of developing children’s literature. We believe this effort will reap rewards for the Arab world in future generations.”

The second session will take place on July 11. Participants will be presented with examples of internationally- acclaimed stories and will study different experiences of Arab and foreign writers. In addition, they will share ideas on how to address creative challenges faced by storytellers operating in the early childhood and pre-school space and will discuss the importance of accompanying graphics for books. The session will give participants a clear understanding of how to produce creative works individually, bilaterally and collectively. The third session, which begins in August, will focus on narrative techniques in writing that targets middle to late childhood readers. The session will impart to participants practical and scientific tools to analyze and critique children’s stories using objective criteria. In the fourth session, being held in September, participants will analyze middle to late childhood works for form and content and develop a theoretical outline of each story. By the end of session, the participants should be equipped to adopt new ideas and fresh perspectives on topics that align with their own personality and interests.

At the fifth and final session in October, participants will present initial outlines of their own stories. Participants will discuss among themselves their feasibility, the main characters, the themes, forms and styles, and how to choose the best tools for producing their content.