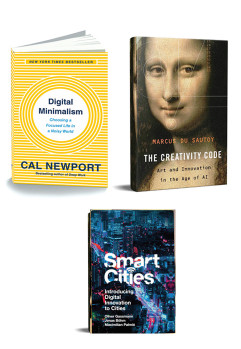 DIGITAL MINIMALISM: CHOOSING A FOCUSED LIFE IN A NOISY WORLD

How many times do you check your smartphone? If the number is higher than 47 times a day, then you’re officially an addict.

That’s the bad news. The good news is that you’re not alone. Andeven though this is a relatively new malaise, experts are already finding ways to help people reclaim their former lives.

One those experts is Cal Newport, an associate professor of computer science at Georgetown University in Washington, DC, who argues in his new book, Digital Minimalism: Choosing a Focused Life in a Noisy World, that our use of smartphones is disrupting our lives in a way that erodes individual autonomy.

Published by Portfolio Penguin, the book describes how we can improve the quality of our lives by becoming digital minimalists. This could be appealing to most peoplein this increasingly tech-centric world where so many of us struggle to lead a focused life.

Digital minimalism is a concept that advocates taking a step back and reflecting on which digital communication tools add the most value to your life. The idea here is that by clearing away insignificant digital clutter in a considered, purposeful way, you will improve the quality of your life.

The truth of the matter is that people tend to be more addicted to social media and smartphones than they would care to admit. That’s why in this 304-page book, Newport tries to tackle the big question: how do we manage our personal lives in a tech-dominated world?

The book is divided into two parts: in part one, ‘Foundations’, the author gives the origins and evolution of the today’s smartphone addiction problem.

Newport writes that “one of the major selling points of the original iPhone was that it integrated your iPod with your cellphone, preventing you from having to carry around two separate devices in your pockets.”

The technological innovation spearheaded by Apple and other major tech companies has, by stealth, taken over many aspects of our daily lives, Newport argues.

“Our current unease with new technologies is not really about whether or not they’re useful. It’s instead about autonomy,” h e w rites, a dding “we signed up for these services and bought these devices for minor reasons—to look up friends’ relationship statuses or eliminate the need to carry a separate iPod and phone—and then found ourselves, years later, increasingly dominated by their influence, allowing them to control more of how we spend our time, how we feel, and how we behave.”

The second part of the book offers ideas for designing a lifestyle framed around digital minimalism. Newport examines fundamental issues such as how to improve the quality of our lives by supplanting some of the time we spend on devices and gadgets with spells of solitude and leisure.

The declutter process, as he dubs it, comes in three steps: First, decide which technologies you can do without. These may include anything you are able to stop using without this negatively impacting the daily functioning of your professional or personal life. Acknowledging that many people must use these technologies for work, Newport suggests devising a concrete plan that spells out when and how to use digital devices.

For example, a social media manager at a firm who uses Facebook Messenger to engage with people who follow the company’s Facebook page could choose to use the app only when on a work computer and only during work hours—embracing a mantra of ‘I will not use the app outside of work hours. I will not download the app on my cell phone or my home desktop.’

In taking such steps, the decision to end your obsession with your smartphone should be a conscious one. “Smartphones are the preferred Trojan horse of the digital attention economy,” says Newport, and so “declaring freedom from your smartphone is probably the most serious step you can take toward embracing the attention resistance.”

Part two of the Newport plan recommends refraining from using any optional technologies for 30 days. During this time, Newport says that “you must aggressively explore higher-quality activities to fill the time left vacant by the optional technologies you’re avoiding.” Most of the testers who failed to observe this rule this felt bored and uneasy, he observes.

In the third and final part of the declutter process, you learn how to reintroduce some of those optional technologies into your life if they provide you something that you value profoundly.

While some suggestions made by Newport such as reading books, getting out with friends, and writing may seemcommon sense, they reaffirm the preeminent value of leisure activities over compulsively checking our smartphones.

This easy-to-read book is not intended to entirely remove the role that new technology has played in our lives but it may change how y ou r elate t o s ocial m edia a nd y our smartphone.

Cal Newport is an associate professor of computer science at Georgetown University and the author of six books, including Deep Work and So Good They Can’t Ignore You. You won’t find him on Twitter, Facebook, or Instagram, but you can often find him at home with his family in Washington, DC, or writing essays for his popular website calnewport. com.

THE CREATIVITY CODE: ART AND INNOVATION IN THE AGE OF AI

What will the future of creativity be? How will machine learning disrupt, enrich, and transform our understanding of what it means to be human?

Can a well-programmed machine do anything a human can—only better? Complex algorithms are choosing our music, suggesting our partners, and driving our investments. They can process more data than a doctor or lawyer and act with greater precision. For many years we’ve taken solace in the notion that they can’t create. But now that algorithms can learn and adapt, does the future of creativity belong to machines too?

Marcus du Sautoy takes us to the forefront of creative new technologies and offers a more positive and unexpected vision of our future cohabitation with machines.

In The Creativity Code he considers what machine learning means for the future of creativity: “At some level, all these expressions of creativity are the products of neutral and chemical activity. Creativity is a code that evolution across millions of years has honed inside our brains. If we unpick the creative outpourings of the human species, we can start to see that there are rules underlying the creative process. So is our creativity in fact more algorithmic and rule-based than we might want to acknowledge? Can we hope to crack the creativity code?”

He says that his book aims to explore the limits of the new Artificial Intelligence to see whether it can match or even surpass the marvels of our human code. Could a machine paint, compose music, or write a novel? It may not be able to compete with Mozart, Shakespeare, or Picasso, but could it be as creative as a child when asked to write a story or paint a scene?

While most recent books on AI focus on the future of work, The Creativity Code moves us to the forefront of creative new technologies and offers a more positive and surprising vision of our future cohabitation with machines. It challenges us to reconsider what it means to be human—and to crack the creativity code.

Marcus du Sautoy is the Charles Simonyi Professor for the Public Understanding of Science and Professor of Mathematics at the University of Oxford and the bestselling author of The Music of the Primes, Symmetry, and The Great Unknown.

Transformation through digital innovation is becoming an imperative for every city. The ‘Smart City’ concept promises to solve the most urgent challenges of progressive urbanization in the areas of mobility, energy, water supply, security, housing, and social inclusion. While some ‘lighthouse cities’ like Barcelona, London, Munich, Lyon, and Vienna are exploiting smart city possibilities, less tenacious pursuit of such possibilities in the majority of municipalities has resulted in major discrepancies between the leaders and the laggards. Although the necessity of action is frequently recognized, an appropriate path of action remains obscure.

Smart Cities: Introducing Digital Innovation to Cities offers answers, with illustrative examples, to questions that many cities are still struggling to answer. The book identifies the core elements and potential of smart cities, best practice methods and tools to be implemented, as well as how diverse stakeholders might be effectively integrated.

“Cities today face tremendous challenges concerning livability, mobility, energy, and communication. These challenges are forcing them to reconsider their former self-conception, their functionality, and their service offerings. However, cities that focus actively on their objectives and on the requisite digital transformation can imagine and realize entirely new living spaces,” the authors argue.

Tapping into years of international research, the book pulls together the authors’ collective experiences in practice-based political, administrative, and economic projects to provide a common framework to guide and engage key stakeholders in how to realize smart cities.

The book notes that various key questions about smart city development remain unanswered such as: “What are the core elements of smart cities? What steps should be followed in building them? Where does the greatest potential lie? What is the ideal starting point? What procedures have other cities applied? What can be learned from
pioneers in the field?”

The authors answer these questions in the form of solution paths, accompanied by design concepts and success factors. The book covers the following topics: the future of cities; an overview of smart cities; smart city management model; smart city lighthouses; guidelines for smart city transformation; and tools for making your city a smart city.