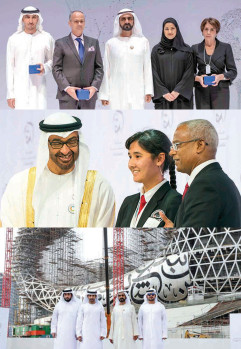 Ten winners received the highest Emirati scientific honour recently when they were each awarded the Mohammed bin Rashid Medal for Scientific Excellence.

The winners were selected from a pool of 200 scientists who were nominated for the second edition of the Mohammed bin Rashid Medal for Scientific Excellence, which seeks to recognise outstanding scientists and researchers for their achievements and contributions in various fields.

The award ceremony took place on the sideline of the second annual meeting of the Mohammed bin Rashid Academy of Scientists, which attracted more than 150 scientists and researchers from throughout the world.

The second annual meeting of the Mohammed bin Rashid Academy of Scientists included several workshops that brought together experts in various fields to explore the challenges facing the scientific community, and to proactively propose solutions to overcome them.

By identifying work across sectors that are cornerstones of the UN Sustainable Development Goals, the Zayed Sustainability Prize presents “an unparalleled global platform for ideas that have the power to benef it humankind and our planet”.

That was the message from His Highness Sheikh Mohamed bin Zayed Al Nahyan, Crown Prince of Abu Dhabi and Deputy Supreme Commander of the UAE Armed Forces, when he presented awards to the 10 winners of the 2019 Zayed Sustainability Prize recently.

In the presence of Vice President and Prime Minister of the UAE and Ruler of Dubai, His Highness Sheikh Mohammed bin Rashid Al Maktoum, Sheikh Mohamed bin Zayed congratulated the winners and praised their efforts and valuable contribution to supporting sustainable development. He encouraged them to keep up the good work to find innovative and sustainable solutions to address current and future global challenges.

He also praised their creative ideas and efforts that have contributed to the economic and social development of their countries and regions.

The prize honours leaders whose work and spirit of enterprise has resulted in working solutions across communities around the world. The global high schools category seeks to inspire young minds and encourage entries based on concepts or proposed projects that can be implement with the award’s prize money.

Vice President and Prime Minister of the UAE and Ruler of Dubai, His Highness Sheikh Mohammed bin Rashid Al Maktoum visited the Dubai Future Foundation recently, where he was briefed on the development of the foundation’s various projects.

HH Sheikh Mohammed toured AREA 2071, which is designed as a collaborative innovation hub to bring together individuals and organisations to form a creative community focused on solving important human challenges at scale. AREA 2071 is considered a physical manifestation of the UAE Centennial Plan that aims to make the UAE the world’s leading nation by 2071.

HH Sheikh Mohammed was briefed on the progress of other initiatives, including Dubai 10X, Dubai Future Accelerators, Dubai Future Academy and One Million Arab Coders, among others. He also inspected construction progress on the Museum of the Future, which is set to open in 2020.