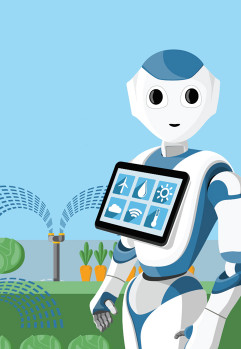 From climate change to population growth, agriculture promises to be one of the most pertinent issues of the next century. That’s why the UAE is taking steps to become a leading global centre for agricultural innovation.

The United Nations predicts that the global population will reach 9.8 billion by 2050, while simultaneously the intergovernmental organisation warns that shifting weather patterns and rising sea levels present an unprecedented threat to global food production. Indeed, while agribusiness is set to be one of the most profitable industries of the next few decades, it will also be one of the most challenging areas of business in the next century.

According to industry experts McKinsey and Co, agribusiness currently makes up an AED18.4 trillion global industry, which is expected to grow substantially over the next half a century. Although profitable, it is expected to come with its own challenges too. Current predictions suggest that 40% of global water demand will not be met by 2030, while 20% of farming land is already underperforming due to soil degradation, according to the consultancy firm.

The issues affecting farming range from population growth to climate change and the resulting impact on farmable land resources, with countries from New Zealand to South Sudan already impacted. According to the Environment Aotearoa 2019 report, nitrogen output is creating a crisis in the New Zealand farming industry. Moreover, climate change is affecting all areas of industry (water changes are key to this – since 1977, the country’s glaciers have lost around one quarter of their ice). Meanwhile, South Sudan is facing famine due to disruption to its farming as a result of conflict, again w ith c limate change hanging heavily over the situation (according to the UN’s Climate Change Vulnerability Index 2017 the country is amongst the five worst affected in the world).

Indeed, education, development of smart technologies and addressing climate change issues will be key to equipping communities with the necessary tools to manage the changing farming landscape, and resulting impact on agribusiness.

AGTECH AND THE UAE

AgTech (agriculture technology) is one of the most profitable and fast changing sectors of farming. It’s also the sector most likely to provide solutions to the global issues facing the industry. As such, the UAE government recently announced a historic AED1 billion series of incentive packages for the country’s AgTech sector, in order to boost jobs and to help stimulate the farming industry in the country.

“The initiative has been launched to accelerate the growth of local AgTech companies and encourage other leading international companies in the field to invest in Abu Dhabi, helping to transform the sector and, in turn, create new opportunities that will positively impact the economy in the mid- and long-term future,” explained His Highness Sheikh Mohamed bin Zayed Al Nahyan, Abu Dhabi Crown Prince and Deputy Supreme Commander of the UAE Armed Forces.

The Abu Dhabi Investment Office (ADIO) confirmed that the initiative is part of the Abu Dhabi government’s accelerator programme, Ghadan 21. A set of cash and non-cash incentives will be made available to agricultural technology companies locally to aid growth, and international companies to accelerate their establishment in Abu Dhabi.

Incentive packages will be awarded to local and international companies in three key sub-sectors: precision farming and agriculture robotics; bioenergy (algae); and indoor farming. The incentives could reach up to 75% rebate on R&D expenses.

But what is AgTech? Describing it as “a great investment for the future”, Erik Kobayashi-Solomon, founder of IOI Capital and author of The Intelligent Option Investor, told forbes.com: “AgTech represents the application of technology – especially software and hardware technology – to the field of farming. AgTech is an industry that encompasses diverse solutions to almost every step in the food production process. I think of AgTech innovation in terms of three classes that are ‘Tech Assisted Farming’, ‘New Farming’ and ‘Revolutionary Farming’.”

His Excellency Saif Mohammed Al Hajeri, Chairman of the Department of Economic Development, said that the incentive packages would enable the creation of advanced AgTech knowledge in Abu Dhabi and help to solve traditional farming challenges.

“This will not only benefit the UAE, but also other nations across the world with arid conditions. Our aim is to position Abu Dhabi as a beacon for innovation in agriculture technologies applied to desert environments.”

SMART FARMS OF THE FUTURE

A herd of specialised agribots tend to crops, weeding, fertilising and harvesting. Robots capable of microdot application of fertiliser reduce fertiliser cost by 99.9%.

The farm generates data that is stored in the cloud. It can be used to help grant applications and farm inspections, saving on an average $7,000 per farm per year.

Sensors attached to livestock allow monitoring of animal health and wellbeing. Texts can alert farmers when a cows goes into labour or develops infection, increasing herd survival and increasing milk yields by 10%.