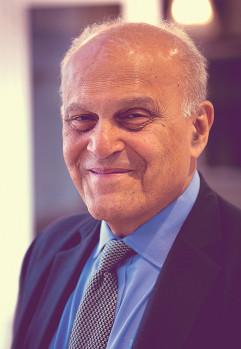 LIFE AT THE CUTTING EDGE

It was 31 years ago that doctors sat Steve Syer down and told him that without a heart transplant he could be a mere 12 hours from death. That while transplant surgery was, and remains, a terrifying prospect, the alternative was far more fearsome. He would not live to see his children grow up.

The picture ended up being very different though. Now 72, Steve didn’t just watch his own kids fly the nest. As a result of his then quite pioneering surgery, he’s also gone on to hold six grandchildren and two great-grandchildren, and has been instrumental in raising more than Dhs5.7 million for his local branch of the British Heart Foundation in Cheltenham, England. All experiences which, he says, are thanks to one man – Egyptian cardiothoracic surgeon Professor Sir Magdi Yacoub.

“I said to the nurse, ‘How will I know it is him?’” Steve says of waiting for surgery, and his surgeon, all those years ago. “The nurse said, ‘You will just know, he has a presence about him’. And it was absolutely true. As soon as he stuck his head round the door we knew.”

Describing his surgeon as “very humble”, Steve says: “People would approach him at charity events and things like that and say, ‘Thank you for what you’ve done for me’. And he would say, ‘That is no problem, I am only doing my job’.

“He always seemed to know exactly who you were and what had been done to you, without having to look at any notes. And he was very approachable – you could ring his office and speak to him if you needed to.”

Knighted for services to medicine and surgery in 1991, Sir Yacoub is seen as a pioneer in the field of transplant surgery, and was not only the first British Heart Foundation Professor of Cardiothoracic Surgery, he also remains the surgeon who has carried out the most transplant surgeries in the world.

A skilled researcher, the 83-year-old is also credited with creating a number of cutting-edge procedures, and has used his time in the theatre to explore new methods of treating and preventing cardiovascular disease before transplant surgery is needed.

“I had an innate desire to know new things, to perfect what we were doing, to evaluate new forms of treatment and to study and improve surgical techniques,” he says of his decision to branch out into research as well as surgery.

“We were swamped, and we couldn’t cope with what was going on, but we also found that cardiac surgery provided material for studying the basic elements of cardiovascular disease. We saw that we could prevent disease as well as treat it, and if we put ourselves out of a job, great – really, you felt if you could do that, you could go and grow oranges and be very happy.”

Not content with conducting both life-saving surgeries and research, in 2008, Sir Yacoub set up the Magdi Yacoub Heart Foundation (MYF) – an Egyptian registered NGO – with the aim of establishing a medical centre of excellence and international standing dedicated to cardiovascular surgery, treatment and research. Based entirely on donations, MYF set up the Aswan Heart Centre and the Aswan Heart Research Centre, both of which were cited for their excellence at last year’s Mohammed bin Rashid Al Maktoum Knowledge Awards, where Sir Yacoub was one of the award’s recipients.

“I had an innate desire to know
new things, to perfect what
we were doing, to evaluate
new forms of treatment and
to study and improve surgical
techniques”

Sir Yacoub is also the founder of Chain of Hope, a UK-based charity that oversees his work to establish self-sufficient heart treatment centres across the world. “When I finished my training, I used to go out to Egypt with colleagues I met during my training and help them treat children with heart conditions,” he says of its creation. “Heart surgery was just starting then but it was not available across the world. Then we went to South America and to Africa as a group of two or three. We realised we needed a sustainable organisation, which will survive me, and so I established Chain of Hope UK.

“We have networks now, we know almost everybody around the world. That’s what Chain of Hope does – around the world including the countries that need it. We work with them to create a sustainable service. In Aswan, Egypt, for example, the unit performs all types of operations on small babies, newborns, the switch operation, by local staff, day and night, free of charge.”

It’s quite a career history and one would easily forgive Sir Yacoub if he were now to be found growing those oranges, having stepped back from the operating table in favour of a relaxing retirement. But, ever-ambitious, Sir Yacoub says that’s not for him.

Speaking to the British Heart Foundation, he revealed: “I don’t want to slow down because it’s a way of life, it’s something I enjoy.

“I have children and grandchildren and if you asked me who my favourite child is, I would say I love them all. I feel the same about my research. So is it operations for children with congenital heart disease? Yes, of course. Is it new methods in transplantation and immunosuppressants, seeing people survive longer? Of course. Is it tissue engineering and the regenerative therapy? Of course. But it’s all related and to pick one of them and say, ‘This is my favourite’, I am not going to do it.

“I do feel tired a lot but I enjoy what I do and I cannot sit on a beach for half an hour without thinking about something – I really get bored. I don’t want to slow down because it’s a way of life, it’s something I enjoy thoroughly and I wake up at 3am thinking about writing a grant to the EU or reading the latest issue of Nature. I am not suffering.”

1999 Lifetime outstanding achievement award in recognition of contribution to medicine, Secretary of State for Health (UK)

2007 Honorary citizenships of the city of Bergamo, Italy

2011 Order of the Nile for science and humanity