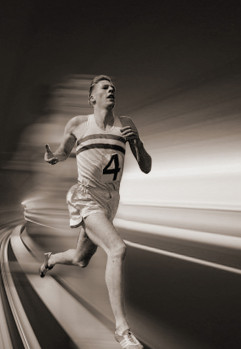 In 2013, the oldest known sundial was unearthed in the Valley of the Kings, Egypt. It dates back to around 1500BC, and we can surmise that people have been measuring how quickly things can travel or be achieved ever since. Whether it’s Roger Bannister becoming the first man to run a mile in less than four minutes 65 years ago or the desire to break the sound barrier or simply the urge to travel at the highest possible velocity – speed is of the essence. Flashes looks back at five historical speed records.

THE SPEED OF LIGHT

Galileo is the first scientist who tried to determine the speed of light. Until his efforts, it was accepted that light didn’t actually travel – it was just instantly present. In the first half of the 17th century, using a water clock in which the quantity of water passing from a container represents the amount of time passed, the ‘father of the scientific method’ proved that that the speed of light “if not instantaneous, is extraordinarily rapid”.

His method was surprisingly simple – Galileo and an assistant each had lamps which they could cover when required. Galileo would uncover his lamp, and the moment his assistant saw the light, he would uncover his. By measuring the elapsed time until Galileo saw his assistant’s light and knowing how far apart the lamps were, Galileo deduced that he could determine the speed of the light, which he calculated as travelling at least ten times faster than sound. Today the adopted value for the speed of light, according to the General Conference of Weights and Measures, is 299,792.458 kilometres per second.

The first land vehicle to officially break the sound barrier is Thrust SSC, short for Super Sonic Car. British entrepreneur and adventurer Richard Noble was the project director and one of the designers of Thrust SSC, which managed to break Noble’s own land speed record that he held between 1983 and 1997, when he achieved 1,047.49 km/h in Thrust 2. Thrust SSC had RAF fighter pilot Andy Green behind the wheel. In the Black Rock Desert in the state of Nevada, USA, the 16.5-metre, 10.5-tonne car clocked an incredible 1,228 km/h, powered by two Rolls-Royce Spey turbofan engines normally used in the British F-4 Phantom II jet fighter.

With 195 events and 7,134 athletes from 121 National Olympic Committees, The Munich Games 1972 were the biggest games to date. Despite being marred by tragedy with the ‘Munich Massacre’ terrorist attack, there were unprecedented sporting events. American swimmer Tim ‘Silver’ McKee became the holder of the unenviable record for losing a gold medal by the smallest margin in Olympic history. McKee and Sweden’s Gunnar Larsson both clocked 4:31.98 secs in the 400-metre individual medley, but the electronic timing was sensitive enough to measure to thousandths of a second and Larsson’s 4:31.981 defeated McKee’s 4:31.983 by a margin of 2/1,000ths of a second. In the following controversy, it emerged that McKee could have lost the gold if the paint on the wall in his lane had been applied slightly thinner than other lanes. The loss caused a change in international rules and measuring to a thousandth of a second was scrapped.

Italian mountaineer Hans Kammerlander, who has climbed all but one of the world’s 14 peaks over 8000 metres, is listed in the Guinness World Records as the holder for the fastest ascent of Mount Everest’s north face – a staggering feat that he accomplished in 16 hours and 45 minutes. He followed climbing the world’s highest mountain in the quickest time by skiing back down it – the first-ever ski run from the summit of Everest. This remains one of the highlights of Kammerlander’s incredible career. “One of my most significant personal successes was the ski run down from the summit of Mount Everest in 1996. I was on the summit earlier than planned, could rest, stay in the moment, and enjoy the indescribable anticipation of the descent,” he says.

Speed wasn’t merely a badge of honour for Kammerlander, often times speed could make all the difference between life and death. For ethical reasons, he didn’t use bottled oxygen and reduced his equipment to the most vital so as not to carry illusory safety up the mountain. He thereby saved on weight and could spend the least time possible in the death zone above 8,000 metres, where there is not enough oxygen for humans to breathe.

Nevada, USA, is home to one of the fastest, flattest, straightest roads on earth. So every year speed demons from around the globe meet up at Battle Mountain with a burning need for speed. At the ‘World Human Powered Speed Challenge’, on 17 September 2016, Todd Reichert claimed the title of World’s Fastest Human by travelling an incredible 144.17km/h in the Eta speedbike, which he and his team at Aerovelo designed. Reichert founded Aerovelo with Cameron Robertson in 2010 and they created three bikes before Eta, which was specially commissioned to try and break the speed record. Unlike with their previous models, the Eta dispenses with cockpits and windows, leaving the rider reliant on a video display for speed stats and other vitals.

The Eta, which gets its name from the Greek letter ‘Eta’ used in engineering to denote efficiency, comprises an aerodynamic carbon fibre shell, lightweight frame and a recumbent layout so the rider sits back. The margins are so tight in setting this record that a previous attempt was dashed due to a squashed bug on the nose of the bike that prevented it from hitting maximum velocity.