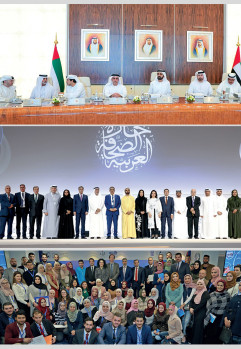 UAE Aims to Become Global Leader in Artificial Intelligence by 2031

UAE Aims to Become Global Leader in Artificial Intelligence by 2031

The UAE is ready to embrace technological advances and seeks to employ artificial intelligence (AI) to enhance everyday life in the country.

That was the message from His Highness Sheikh Mohammed bin Rashid Al Maktoum, Vice President and Prime Minister of the UAE and Ruler of Dubai, recently, when the UAE Cabinet adopted the National Artif icial Intelligence Strategy 2031.

“We have launched a national strategy for artificial intelligence to make it an integral part of our business, our lives and our government services,” said His Highness Sheikh Mohammed.

The National Artificial Intelligence Strategy 2031 includes eight strategic objectives. They include reaffirming the UAE’s position as a global hub for artificial intelligence; increasing the competitive edge of the AI sector in the UAE; establishing an incubator for AI innovations; and employing AI in the field of customer services to improve the quality of life. The objectives also include attracting and training talents for jobs of the future; attracting leading research capabilities; providing a data-driven infrastructure to support AI experiments; and optimising AI governance and regulations.

A number of initiatives under the AI Strategy are aimed at employing artificial intelligence in vital areas such as education, government services and community wellbeing. Its implementation will be overseen by the Emirates Council for Artificial Intelligence and Digital Transactions, in coordination with a number of local and federal entities.

The Cabinet meeting, at the Presidential Palace in Abu Dhabi, heard that the strategy will focus on the fields of resources and energy, logistics and transportation, tourism and hospitality, healthcare and cyber security as areas of priority during the first phase of implementation.

His Highness Lt. General Sheikh Saif bin Zayed Al Nahyan, Deputy Prime Minister of the UAE and Minister of the Interior, and HH Sheikh Mansour bin Zayed Al Nahyan, Deputy Prime Minister and Minister of Presidential Affairs, also attended the Cabinet meeting. They heard that the national economy would witness an immediate positive impact from applying AI technologies. AI applications are expected to contribute to the national GDP in the coming years, which will create new economic opportunities.

Vice President and Prime Minister of the UAE and Ruler of Dubai, His Highness Sheikh Mohammed bin Rashid Al Maktoum honoured the winners of the 18th edition of the Arab Journalism Award recently.

Search on for Distinguished Emirati Students

Dubai’s Knowledge and Human Development Authority (KHDA) is looking to provide scholarships to over 100 students in the third round of the Mohammed bin Rashid Distinguished Students Programme.

The MBR Distinguished Students Programme aims to prepare young Emiratis and equip them with the skills needed to achieve success and excellence through innovative, smart and positive educational methods. It is managed by KHDA, in partnership with the Knowledge Fund and private school operators, under the direction of His Highness Sheikh Mohammed bin Rashid Al Maktoum, Vice President and Prime Minister of the UAE and Ruler of Dubai. Open to students in Grade 3 or above, applications for the latest round of scholarships were being accepted until 29 April.

Fatma Al Marri, CEO for Development of Emirati Student Education Programmes at KHDA, said: “The scholarship programme provides a stepping-stone to better opportunities in life. Our Emirati students thrive and flourish in environments that enable them to widen their horizons. Together with strategic partnerships, we want to make every effort to provide the best quality education for young learners in Dubai.”

Knowledge Week Jordan, which concluded recently, has been hailed as a great success. The event was staged by the Mohammed bin Rashid Al Maktoum Knowledge Foundation (MBRF) and the United Nations Development Programme (UNDP) in collaboration with the Jordanian Ministry of Youth and the Abdul Hameed Shoman Foundation (AHSF).

Held in the Jordanian capital of Amman and attended by several prominent Jordanian universities and 750 college students, the week’s activities included announcing and discussing the findings of the Global Knowledge Index 2018 (GKI), focusing on the metrics pertaining to Jordan, and discussing ways to improve the country’s knowledge performance on the level of the seven sectors covered by the Index.

Also on the agenda was the announcement of several workshops as part of the ‘Know Talks’ programme, launched by MBRF at the Knowledge Summit 2018.

Knowledge Week Jordan kicked off with a series of sessions with university students and professors at the Hashemite University and the University of Jordan, followed by a Global Knowledge Index three-day workshop for youth selected from all provinces of the kingdom.

The objective of the workshop was to empower the youth to explore innovative ideas that tackle development challenges. Participants were provided with critical knowledge tools to build their future vision of Jordan and create a meaningful impact. They looked at the fields of preuniversity education; higher education; technical and vocational education and training; research, development and innovation; information and communications technology; economics; and general enabling environments.

In collaboration with the Abdul Hameed Shoman Foundation and the Ministry of Youth, and under the patronage of Jordanian Prime Minister His Excellency Dr Omar Al Razzaz, the workshop sought to motivate the young participants to outline plans of action to address challenges preventing the establishment of a knowledge-based society in Jordan. The event closed with a ceremony that brought representatives from ministries, government departments, media outlets, research institutions and private companies together with university students from all around the country.

Jordan’s Minister of State for Media Affairs and Communications, and Government Spokesperson, Her Excellency Jumana Ghunaimat thanked MBRF and the UNDP for choosing Jordan to host Knowledge Week, noting that the Jordanian government intends to benefit from its outcome and the findings of the Global Knowledge Index to avoid falling behind on the Fourth Industrial Revolution.

Jordan’s Minister of Youth and Culture, Dr Mohammed Abu Rumman announced the ministry’s intentions to adopt several knowledge initiatives rooted in the outcomes of the GKI workshop and Knowledge Week and to provide full support for these initiatives through youth centres spread across Jordan.

MBRF CEO, His Excellency Jamal bin Huwaireb said the outcome of Knowledge Week Jordan was “in line with the strategic objectives MBRF and UNDP hope to achieve from holding such initiatives around the world, which include spreading the findings and recommendations of the Global Knowledge Index and fostering a meaningful exchange of knowledge, expertise and best practices”.

Two of the teams participating in the Global Knowledge Index workshop won an opportunity to attend the Knowledge Summit, in Dubai, and participate in setting topics of discussion for the event.