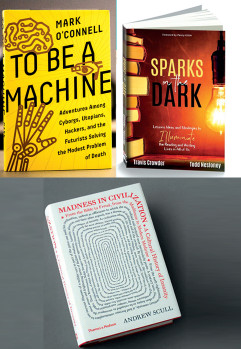 SPARKS IN THE DARK

SPARKS IN THE DARK: LESSONS, IDEAS AND STRATEGIES TO ILLUMINATE THE READING AND WRITING LIVES IN ALL OF US

In Sparks in the Dark T ravis C rowder a nd Todd Nesloney disrupt the universe of reading and writing instruction by discarding traditions and opening classrooms to choice, passion and authenticity.

Words matter! That, in a nutshell, is the central theme of Sparks in the Dark: Lessons, Ideas and Strategies to Illuminate the Reading and Writing Lives in All of Us. Books have the power to shape the way we think. Stories – reading them, writing them and sharing them – have the power to change our perspective of the world and the people we encounter. Unfortunately, some educational systems and approaches are geared towards making reading and writing a chore rather than instilling a lifelong love for books in students.

In Sparks in the Dark, Travis Crowder and Todd Nesloney share their experiences as educators who purposefully seek to spark a love for reading and writing in the learners they serve. What begins as a spark, fuelled by passion, can become a f lame or even a beacon. Reading is important. Writing is important. Education is important. This entails rethinking and sometimes discarding hidebound traditions and opening classrooms to choice, passion and authenticity.

“Students can be required to read specific texts or write particular essays, but if they’re not intrigued, captivated or truly engaged, it’s just an academic exercise. To shape students into lifelong readers and writers, we must relinquish some of our control and allow kids the freedom to choose the books and topics that speak to them.”

What shines through in Sparks in the Dark is the commitment, passion and authenticity of the authors. They share stories of their successes and failures and highlight that teaching is a two-way, never-ending journey between educators and students. As Crowder points out: “Quality reading instruction does not begin with literature, it begins with students.”

It is clear the authors have the credentials and experience to back up their ideas.

Nesloney is the Principal/Lead Learner of Webb Elementary in Navasota, Texas. He formerly taught 4th and 5th grade for seven years. He is the 2015 Bammy Award Recipient for Elementary Principal of the Year, and the 2014 Bammy Award Recipient for Elementary Classroom Teacher of the Year, the TCEA Teacher of the Year for 2014, a White House Champion of Change, and a National School Board Association’s “20 to Watch”. He is also an award-winning author for his work in co-authoring Kids Deserve It!, Sparks in the Dark, and authoring Stories from Webb.

Travis Crowder is a middle school English/Language Arts teacher at East Alexander Middle School in Hiddenite, North Carolina, who has taught for 10 years and has experience in both middle and high school levels. He feels reading and writing are the soul of a teaching life and strives to help his students and co-workers build robust reading and writing lives. Crowder has worked with teachers to develop reading and writing workshop approaches in their classrooms.

In Sparks in the Dark, Nesloney’s voice opens a window into the thinking of a school administrator deeply involved in instructional leadership, while Crowder speaks to readers in the voice of a classroom teacher striving to make instruction both authentic and deeply meaningful for his middle school students.

“In writing this book, we sought to encourage, challenge, inspire, question and shift your thinking when it comes to reading and writing and instruction overall. We hope we have shown you glimpses of our hearts and our classrooms and schools as examples of what is truly possible when you start to believe in what was once thought as improbable.”

Through the stories and real-life examples they share, the authors light the way to:

. Incorporating literacy skills in every subject in engaging ways.
. Empowering students and staff to ask and explore tough questions about the world.
. Encouraging learners at all levels to choose to read books that challenge them.
. Taking responsibility to seek and share learning for everyone’s benefit.

In order to achieve these goals, Crowder and Nesloney are adamant that educators need to lead by example.

“If our goal is to build our students’ capacity as readers and writers, it is imperative that we participate in the process of reading and writing as well, where in everything we do, in every subject we teach, the poetry of math, the metaphor of science, the humanity of history, and the literature of language arts combine to create a beautiful experience, all united by literacy.”

The authors are also firm advocates that teaching goes beyond pedagogics. “It is all of our responsibility to provide our students the educational experiences that empower them. Reading and writing are so important today in all of our classrooms as facts are being altered, silenced and negated. Students need to be able to read critically and communicate effectively in order to amplify their stories, challenge, question and inspire the words and information around them.”

The authors’ passion for enriching the reading and writing lives of students shines through in every word of Sparks in the Dark. It is a rallying cry that students’ growth is dependent on their teachers’ growth. Crowder and Nesloney offer concrete activities for working with students and show the impact of their methods with real examples from the classroom. This book is highly recommended for educators, parents and anyone who recognizes there is always room to learn, evolve and grow as readers and writers.

This brilliant history is a methodical yet always engrossing account of how insanity has been regarded from ancient times to modernity. Sociologist Andrew Scull describes how madness was understood and treated in ancient China, India and the Middle East before focusing on the evolution of European and American visions of mental illness that are now dominant across the world.

Broadly, the idea of insanity as some kind of supernatural possession gave way in ancient Greece to the notion that conditions such as melancholia and mania were located in the body. Yet throughout the Middle Ages, the earlier belief dominated: the aff licted sought solace at religious shrines and through folk superstitions.

In the Enlightenment era, the idea that madness was a treatable bodily condition resurfaced, but it brought with it the “great confinement” – in which large numbers were impounded in asylums, overwhelmingly to their detriment. “Barbarous practices were no respecter of social standing. King George III’s madness was treated with the whip.”

In the 1960s, it was often held that madness was a social construct, a pretext that allowed the state to lock up those who did not abide by its norms. Scull dismisses this theory as “emotional nonsense”, showing that its symptoms – delusion, hallucination, self-harm – have been recorded in all human societies. But he argues that the causes of madness are still essentially “mysterious”. The reductive late- 20th century belief that mental illness is all down to faulty brain chemistry is, he declares, mostly “biobabble”: the currently fashionable tranquillisers and antidepressants are “not cures but palliatives”, which often have disabling side effects.

If there is a subtext to Scull’s mostly cool and appraising survey, it is the propensity of doctors to “go mad for their theories”, said Daniel Pick in Literary Review. He describes some notorious individual cases – such as the New Jersey surgeon Henry Cotton, who in the interwar years, believing that madness was caused by sepsis, excised parts or the whole of his patients’ internal organs.

But there were of course many mainstream treatments that were almost as cruel, from chaining and starving in the 18th century, to lobotomies – essentially inflicting brain damage – in the 20th.

Scull is a good storyteller and his book is well researched, strong on details and alert to the big picture. It deserves to find a wide readership.

TO BE A MACHINE: ADVENTURES AMONG CYBORGS, UTOPIANS, HACKERS AND THE FUTURISTS SOLVING THE MODEST PROBLEM OF DEATH

Transhumanism is a California-based movement whose core belief is that humanity should use technology to evolve beyond its current mental and physical limitations. The practices it advocates include cryogenics (freezing bodies in the hope that they may one day be revived), biohacking (augmenting ourselves with implants and prosthetics), and whole brain emulation (copying our personalities onto computers).

And in this, his first book, Mark O’Connell – an Irish journalist writing in the “gonzo” style of Hunter S. Thompson – describes his encounters with several of transhumanism’s leading lights.

Many of them are hilarious. Like former US presidential candidate Zoltan Istvan, who travels around America in a coffin-shaped “Immortality Bus”. Yet though he can be mocking, O’Connell also shows sympathy for the movement’s aims, which he views as having something in common with religion.

The result is a work of extraordinary exuberance and wit. Transhumanism may sound like a fringe movement, but some very rich and influential people are dabbling in it. PayPal co-founder Peter Thiel has pumped millions into the cause of extending human life spans, especially his own. Ray Kurzweil, Google’s Head of Engineering, is the leading supporter of Singularity, the moment when rapid advances in AI will bring about a merging of humans and machines. He believes this could happen in a “dozen years or so”.

O’Connell explores such beliefs within the wider context of West Coast “radical optimism”, which sees every problem – “even getting old and dying” – as being fixable by technology. And it is his lack of stridency together with his often splendid writing that makes him such a companionable guide to this mindset.

If To Be A Machine has a f law, it’s that O’Connell lacks the scientific literacy to engage with the “technologies on which the transhumanists have pinned their hopes”, said Oliver Moody in The Times. This reduces them to “little more than a menagerie of weirdos”. They may be “wacky”, said David Sexton in the London Evening Standard, but they’re still utterly fascinating.

O’Connell never just plays it for laughs. Underpinning this gem of a book is his altogether serious conviction that life, if it has any meaning, is inseparably bound up with what the transhumanists wish to escape: “birth, and reproduction, and death”.