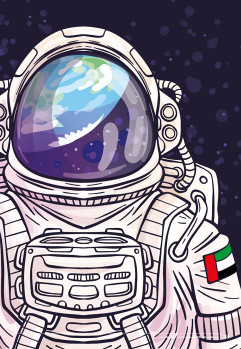 Managing The Effects Of Micro-gravity

A team of students from New York University Abu Dhabi hope to uncover the reasons behind the body’s decrease in immune response when exposed to space-related conditions, and help improve the health of astronauts in the future.

“Space is extremely important, not only to the development of our understanding of our own world, but I would argue that space has already become an integral part of our world,” says Sion Hau. “We explore space to understand our own history and place in the expanses of the universe, but we also explore in the hopes of finding the opportunities that space can provide for us in the future.”

Hau, a second year biology major at New York University Abu Dhabi (NYUD), is part of the team that won Tests in Orbit, a competition hosted by the UAE Space Agency and the Higher Colleges of Technology in Dubai. The competition invited teams of university and college students across the UAE to develop, design and conduct a nano-experiment, with the possibility that their experiments could eventually be launched to the International Space Station as part of the UAE Astronaut Programme.

The competition invited teams of university
and college students across the UAE to develop,
design and conduct a nano-experiment, with
the possibility that their experiments could
eventually be launched to the International
Space Station

“Currently, at any given time, there can be up to 10 people in the International Space Station,” says Hau. “As we discover more about space and invest more in space-related projects, there will likely be an exponential increase in humans that are sent up into microgravity conditions, and so what is most important is that we are prepared for this and understand how our bodies respond to this foreign environment.”

The competition sought to aid research into the effects of microgravity on both life in space and energy in space. The former in order to ensure the optimal health and safety of astronauts during prolonged exposure to zero gravity environments. The latter to test new power sources that could work well in a microgravity environment.

For example, one of the most serious problems induced by long-term weightlessness is bone mineral loss, said the organisers of the competition. Humans exposed to microgravity conditions experience various physiological changes, including reduction in bone density, muscle deterioration and immunedeficiency. Despite many in-vivo and in-vitro studies under both real microgravity and simulated conditions, the mechanism of bone loss, muscle deterioration and immune responses are still not properly understood.

“One of the themes of the Tests in Orbit competition was human/astronaut health in space,” says Hau. “As we started reading about health in space, the team learnt from NASA’s previous research that the human immune response is disrupted during spaceflight. We were intrigued by the findings and wanted to design our own experiment to find out the reasons behind the reduced immune response in space. Because our team is made up of mechanical and electrical engineers, physicist, computer scientists and biologists, our experiment and solutions are quite multi-disciplinary in nature.”

The team’s winning project – ‘Cytokine-Hematopoietic Stem Cell Interaction in Microgravity Environment’ – aims to uncover the reasons behind the decrease in immune response when exposed to microgravity or space-related conditions and, as a result, help improve astronauts’ health in the future.

“The experiment involves sending hematopoietic (blood) stem cells up to the International Space Station in a 10x10x15cm ‘NanoLab’ and observing how the microgravity environment affects the cells and why this leads to a change in the immune system,” says Hau. “After retrieval from the space station, we will do more analytical experiments on the cells that come back. A similar NanoLab will be set up on Earth to compare the results of our experiment. Most excitingly, our team will have the chance to go to the launch site in the US to witness our experiment go up into space.”

“As we discover more about space and invest more in
space-related projects, there will likely be an exponential
increase in humans that are sent up into microgravity
conditions, and so what is most important is that we
are prepared for this and understand how our bodies
respond to this foreign environment”
SION HAU, SECOND YEAR BIOLOGY
MAJOR, NEW YORK UNIVERSITY
ABU DHABI (NYUAD)

The launch opportunity has been made possible by a partnership with DreamUp, which provides schools and universities with low-cost access to space research platforms in sub-orbital and low- Earth orbit, and the company’s Space Act Agreement with NASA. The opportunity also involves a collaboration with NanoRacks, which develops products for the commercial utilisation of space. It’s NanoRacks that will provide technical and engineering support to the NYUD team. Launching the project to the ISS, however, will not be easy admits Hau. “Bringing the project to life will definitely be a challenging process,” she says. “However, we are determined to overcome each of these obstacles to see our experiment through to the end. Some of these challenges include keeping cells alive without power during the launch process, working with microfluidic cell-culture, automating the entire experiment, temperature and humidity control. Luckily, we have the support of the UAE Space Agency and our professors and colleagues so we are optimistic about the success of the project.”

In total, the competition attracted 70 applications and the results were announced in conjunction with the Global Space Congress, a gathering of global space industry leaders that took place in Abu Dhabi recently.

The UAE has placed great emphasis on both space and education in recent years. In April, for example, the Mohammed bin Rashid Space Centre (MBRSC) launched the ‘Hope Generation’ initiative, which aims to help schools encourage students to study science, technology, engineering and mathematic (STEM) subjects and increase their curiosity about space science and exploration.

HOW DOES SPACE AFFECT THE HUMAN BODY?

The human body is conditioned to life on Earth. So what happens when we leave our home planet?

Cosmic radiation, stress, insomnia and trying to re-orient your body’s balance system mean the astronaut’s brain is constantly adapting while in space.

Many astronauts suffer from some vision loss. Although it is not completely understood why, it is believed to be due to increased pressure inside the head. Cosmic rays, usually absorbed by our atmosphere, also create momentary flashes of light.

Astronauts are taller in space. On Earth, gravity compresses our spine. When gravity is week, the space between the vertebrae in our spine is able to expand.

In space, muscles aren’t really needed to hold up our body. Over time, they become weaker and deteriorate. Astronauts must exercise every day to prevent this from happening.

Like our muscles, bones aren’t needed much in microgravity. Without exercise, they deteriorate and become weak and brittle.

In space, hearts don’t have to work as hard to pump blood around the body. So eventually they may shrink, which can cause problems for astronauts when they return to Earth.