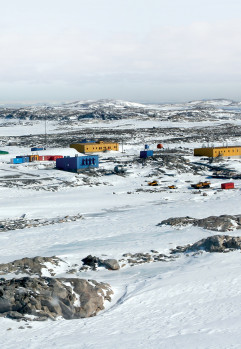 They might be more used to contending with the hot temperatures of a Middle Eastern summer, but solar power experts from Masdar are proving they’re just as adept at harnessing the sun in cold conditions…

When you hear the term solar energy, you could be forgiven for thinking of our strong Middle Eastern sun, beating down on solar panels installed across the UAE’s deserts. And of course, as experts across the emirates continue to work to maximise the resources that can be gained from the region’s climate, you’d not be wrong.

However, it seems all that work in problem-solving our way around the extremes of an Emirati summer has wider benefits than one might think. Experts from Abu Dhabi future energy company Masdar, alongside the Australian Antarctic Division (AAD), recently helped install the first solar panel system at an Australian Antarctic research station.

Aimed at reducing reliance on fossil fuels, and cutting the amount of diesel that needs to be shipped to the Casey Research Station annually by the AAD’s icebreaker Aurora Australis – a journey of 3,443km from Hobart, Tasmania – researchers are hoping the new installation will provide up to 30kW of electric power each year.

If successful, that would amount to around 10% of the electricity needed annually to power the lab, located on Vincennes Bay, in the Windmill Islands, just outside the Antarctic Circle.

“As a global leader in renewable energy, Masdar is honoured to collaborate with the AAD,” said Mohamed Jameel Al Ramahi, Chief Executive Officer of Masdar. He claimed it was a proud moment to see the team “bring our expertise in clean energy from the hot deserts of the UAE to the cold desert of Antarctica, as we strive to implement practical energy solutions, and support research on climate change and environmental protection in line with the Antarctic Treaty System”.

Part of a collaborative project between the AAD and Masdar, it is hoped the relationship between the two bodies will also result in the building of an energy management system and the sponsoring of a Khalifa University research project to improve the monitoring of changes in the Antarctic sea ice. It is also hoped that the project will enable young Emirati professionals to v isit Casey as interns, opening up new opportunities to learn about the challenges of harnessing the sun’s power in some of earth’s most inhospitable climates. Challenges which, according to Doreen McCurdy, Engineering Services Supervisor at Casey, are far from negligible. She said her six-person team faced difficult conditions in installing the solar panels needed, with temperatures as low as minus seven degrees Celsius and a number of blizzards.

“The cold was a challenge, as the brackets and bolts are small and fiddly and can’t be installed while wearing gloves, so we had to use hand warmers to keep our fingers nimble,” explained McCurdy. “On windy days we had to focus on the internal installation, as the elevated work platform we use outside can’t operate in winds above 15 knots. Once all the rails and brackets were in place though, we were able to install about 15 panels a day.”

The solar PV panels themselves were sourced from German company Aleo Solar, and are built to withstand extreme weather conditions, the team said. Indeed, as the coldest continent on earth, the Antarctic experiences wind speeds of up to 300km per hour, and the average temperature ranges from -10 degrees Celsius to -60, depending on the time of year.

As such, extensive simulations were conducted by Masdar and the technical team at Casey to ensure the design could withstand the challenges the weather would be throwing at it. Director Kim Ellis said a special vertical mounting of the panels had eventually been decided upon to ensure the maximum solar gain possible whilst still maintaining stability in the wind and easy access for repair and maintenance. It is hoped additional projects could further increase the lab’s use of renewables.

“It will reduce Casey Station’s reliance on diesel generators for electricity, cutting fuel costs and emissions, as well as boosting the station’s capacity in peak demand periods,” Ellis said of the fledgling initiative. “Once we see how it performs as part of the station’s power grid, we’ll be able to look at how to get more out of the technology in the future.”

Since 2016, solar power has been recognised as the cheapest and most abundant energy source in the world. In fact, it’s believed that there are around 89 Petawatts (PW) of potential solar energy production available on earth.

Solar is also the fastest growing energy resource in the world.

The production and use of solar energy presents very few hazards, leading experts to hail it as the safest renewable source available for the generation of power.

As Swiss pilot Bertrand Piccard demonstrated after taking off from Abu Dhabi in 2016, it is now possible to fly around the world on solar energy alone.

Solar energy can provide power 24 hours a day, seven days a week – contrary to concerns that it only works in daylight hours – thanks to new developments that have seen the cost of solar energy storage plummet in recent years.

Solar is particularly suitable for remote areas that do not have access to an energy grid, thought to house around one billion of the world’s population.