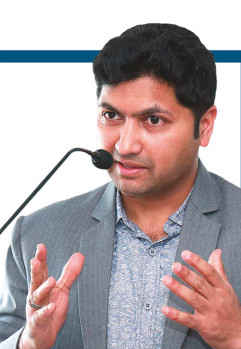 Mujeeb Jaihoon: A Golden Writer in the Digital Age

Mujeeb Jaihoon is an Indian writer based in the United Arab Emirates. His passion extends beyond the realm of habits. Jaihoon tries to inspire his readers through his travels in the cultures of the world, the spirituality of love and self-discovery. Jaihoon loves traveling extensively to the cradle of ancient civilizations in different parts of the world, extending from them what encourages solidarity and human tolerance, stressing the importance of celebrating diversity, besides urging the establishment of the world and declaring its opposition to all forms of wars.

He is very active in the field of women empowerment and education. Through his writings and his participation in conferences and events, he addresses issues related to education and the empowerment of women. He has published several books in English, notably: “Nizamuddin Mission” (2010), “Slogans of the Sage” (2017), “Mothers and Martyrs” (2017), “The Cool Breeze from Hind” (2018), and others. Abdullah Mezer spoke to Jaihoon about his travels and his literary and poetic worlds.

- In the title of your latest book, the “The cool breeze from Hind”, you have used the word “India” in Arabic. What do you mean by this use? What was your aim or message
in this book?

Firstly, the entire title is alluding to a saying attributed to the Holy Prophet [Muhammad]. Secondly, the name India is itself an anglicized form of the original word Hind or Sindh, used by Arabs and Europeans to refer to the area inhabited by people beyond the River Sind. Hence, India is indebted to the Arab world for its very name.

Besides, ‘Hind’ was popularly known across the Arab world, even predating Islam. Authentic historians have reported that wood from India was used in the rebuilding of the Ka’aba, and, the costume of Kathakali, a folk dance in Kerala, was influenced from the Arab world. I have been a passionate observer of Indo-Arab ties, so much that I named my second son, Muhannad, which means the ‘Shining sword of Indian make’, an analogy used by the popular poetic companion Hassan bin Thabit to describe the Holy Prophet. (Yalloh Kama laha alsaqilu almuhandi)

Dubbed as ‘a mystical discourse on Indian Indigeneity’, The Cool Breeze from Hind, treats the reader to a mystic feast of brilliant visual metaphors and powerful imagery. The book draws heavily on Kerala’s historical persons, places and happenings. As part of the rising Right Wing ultranationalism across the globe, India is also witnessing the surge in majoritarian Monoculture, which is hurting the spirit of India’s pluralistic and secular fabric. Minorities in the country have been facing unprecedented attacks of bigotry and alienation from the extremist Right Wing influenced Establishment.

The history, culture and economy of Kerala, the South Indian state, have been highly influenced by the Arab world. Adopting a mystic narrative reminiscent of medieval Sufism, the book celebrates India as a multicultural haven of diversity and tolerance. The entire story is narrated in the Arab cultural backdrop of the Sharjah emirate, where I have lived all my life.

- What are the most important topics that you address in your poems? Do you adhere to a particular poetic formula in each poetic collection?

I often write poems on romantic and divine love. Admittedly, I cannot think of a ‘Love’ that is not Divine inspired— be it among lovers, parent and child or between mentor and disciple. For, I believe, a human being is essentially a spiritual organism, unlike other creations in the universe. Albeit poetry being a personal outburst of subjective sentiments, there are some contemporary issues which do provoke my poetic instincts. Wars and conflicts, gender inequalities, oppression of the weak, communalization of faiththese are often the stimulants for my verses. For the readers’ convenience, the collection of poems in my blog, www.jaihoon.com, have been classified into mystic, maverick or romantic. My poetic collections are thematic in nature- spiritual kinship, war and women, prophetic love have been some of the previous themes.

- You say in your website that you are a tireless traveller and endless explorer. What do you benefit from your journeys and share it with your readers?

To Travel is a virtue; stillness, is a sin. I have been a strong believer in this philosophy of mobility. Travels enable us to gain brand new insight, reinforce our faith, and, at times, rectify some of our misconceptions. For poetic reasons, I find traveling to historic and nomadic places more exciting than to conventional tourist attractions. Diversity of human living conditions is the biggest USP that Travel offers. I o ften t ry t o s hare m y t ravel e xperiences a long with photographs with my readers via my website. Sometimes, my notes transform to books, mostly by readers’ demand (For example, Mission Nizamuddin, my Twitter-based micro travelogue across North India, which was hailed as the first of its kind in the world). Travels also facilitate meeting with exciting personalities.

- You’ve been classified in an Indian publication as the Golden Fighter? What does this mean?

The publication featured several national and international figures including; Prakash Yashwant Ambedkar, the grandson of the principal architect of the Constitution of India. Also included was Medha Patkar, the Indian social activist working on various crucial political and economic issues, and Nick Ut, the Vietnamese American photographer for the Associated Press. Perhaps I was nominated to the list for my activism in personal development and community empowerment.

- You are focusing in your participation in conferences on the empowerment of women and education? Why do these two fields attract you more?

Women are the mentors of the present and future generations. Education and empowerment of women are essential to build a healthy community and thereby a prosperous nation. UAE is a modern example of this successful model. Educational campuses are breeding grounds for tomorrow’s thinkers and leaders. I share some of my disruptive ideas to invoke their critical thought and innovative action.

- How do you find the translation between Hindi and Arabic in the UAE? Do you have specific cultural proposals in general to improve the relationship between the Arab culture and Indian culture?

As the famous Russian proverb goes, “Translation is like a woman: if she is faithful, she is not beautiful; if she is beautiful, she is not faithful”, translations cannot fully convey the spirit of the original culture it was written. However, as literary history has shown, translations have been instrumental in creating universal literatures.

The Indo-UAE relationship is expressively economic in nature. However, there are other aspects, which are gaining momentum. Although UAE is beautifully bound with the magnificent Arabic language, India is home to several languages and dialects. Of late, there have been many books, which reflect the on going intellectual exchange between the two countries. I suggest that the two communities also hold joint sessions to discuss literature and culture. Another strategy of cultural exchange would be to conduct traditional folk related cultural events in both lands. Student exchange programs will also become another catalyst in this direction.

There are many legacies that UAE can share with the world, besides its buoyant economic miracles. I feel tolerance and security are the greatest blessings of this incredible country. With more than 200 nationalities of different faiths living peacefully in one nation, UAE is a global icon of supernatural open-mindedness. Its rulers deserve true praise and gratitude for their visionary leadership. I remember once a profound Indian academician suggesting to hold a conference to deliberate on the exemplary management and leadership strategy of His Highness Sheikh Mohammed bin Rashid Al Maktoum, VicePresident, PrimeMinisterand Rulerof Dubai.

- What are your next works?

I am not a formulaic author. Some of my previous books have been instantaneous decisions. Nevertheless, I have been working on a political biography for some time now. I may attempt a ‘global travelogue’ based on my travels to worldwide cultures.