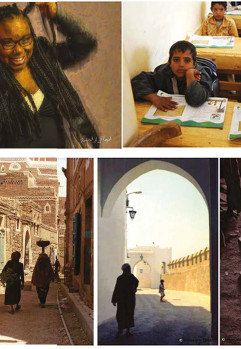 “A picture is worth a thousand words,” goes an English adage which emphasizes the importance of photography in presenting pressing and important issues in our lives. Based on this age-old adage, global photographers discussed their trade, prioritizing issues of women, minorities, and battered people, making the camera the voice of the voiceless, and a call to promote tolerance and positive values.

In this report, which travels through Saudi Arabia, Egypt, African countries, to the United States, Flashes met international photographers who spoke of how the camera has worked for the value of tolerance declared by the UAE as a slogan for 2019.

Egyptian photographer Hossam Diab, founder and head of the Egyptian Photojournalists Division, and a member of the Arab Union of Photographers, stressed the importance of a picture in the rapprochement of people.

Pictures, Diab reasons, provide a better statement about people, especially in remote countries whose members suffer from marginalization, pointing out that pictures support acceptance of one another, tolerance, and break stereotypes.

Speaking about his more than 40 years’ journey, that saw him take pictures of important global events, including the civil war in Lebanon, and the famine in the Horn of Africa, Diab said, “Photographs correct misconceptions especially in view of the current control of social networks on general opinion.”

“When people know the true story of others, they open up with their minds and hearts and become more receptive to them,” he adds, advising photographers to reinforce the notion of tolerance.

The first tip is “to never show people that they are not important or worthless, and that their goal is to highlight the weakness itself, not the weak.”

Diab, who lectures at Cairo University said, “A photographer should also avoid breaking into the
privacy of others unless there is an urgent social reason for it. However, we have to learn about people’s stories courageously,”

Ziad Al-Arfaj, head of photography at the Saudi Arabia based English-language newspaper Al-Arab News talked about a promise he made since his working days as a photographer, to focus only on positive things, stressing that the first of these is tolerance.

Al-Arfaj explained that as a photographer he used the issue of women’s work to highlight the concept of tolerance in Saudi society.

“I chose several successful women at work, holding leadership positions, and showing their image at home among the family,” he said.

He said the aim of photographs is to show that successful women at work also live a successful social life, which supports tolerance towards women’s work especially in a conservative society such as Saudi Arabia.

The pictures of women at home, focused on the idea that if anyone of us lives in a healthy environment, whether a woman or a man, they can reach the highest positions.

“The pictures show that a woman returns home after work as a normal woman who can live her life with her family as usual,” Al-Arfaj said.

“There is now a radical change in the Kingdom with the launch of Vision 2030, and having a serious leader also makes us work and focus more on highlighting the role of women, especially those who have worked since the situation changed, and we are proud of it. Most young people in the Kingdom need role models, so I wanted to highlight these women,” he said.

Among the photographs that Al-Arfaj is proud of is that of Pope Tawadros II, the head of the Coptic Orthodox Church of Alexandria, Egypt, and Patriarch of the See of St. Mark.

The photo was the first of its kind to be published on the cover of a Saudi newspaper and Al-Arfaj believes it also contributed to the cause of promoting tolerance.

On the other side of the world, Mendez Mendes, a lecturer at several American universities stands among his students explaining the role of photography in the consolidation of the concept of tolerance.

He uses the example of two people; one white and the other black, and asks his students to focus on photography angles and lighting. He conducted a photo session for them, in the same situations and techniques.

“The a im of photography a s an art is to present differences without interfering with them, so students should focus on photography itself, not the shape and color of the person they are photographing,” says Mendez. “The photographer carries a message that rejects racism and hatred and transmits diverse views to the public.”

On his part, artist and activist Robert Lloyd, a photography instructor at the University of East Washington, says there are many issues that can be conveyed, such as women’s oppression, skin color, violence, the poor and the hungry through photography.

Lloyd explained that when a picture is transmitting the forms of hunger and poverty experienced by people, it calls on many to empathize with those who suffer, stressing that we must all build a full picture of tolerance and compassion for other levels of human society.

He stressed that there are many stories of violence transmitted to other parts of the world, and when you see the pictures, you ask yourself: “What is your relationship with them? Do you accept or reject this thought?”

He pointed out that the answer always comes through building the concept of tolerance in the community by sharing quiet observations among individuals, and the transfer of different views.

“If you plan to convey the concept of tolerance to students or to convey different opinions and beliefs, there are several excellent ways to facilitate this when looking at some pictures, for example, the photo of an African-American boy behind an iron fence, or another photo that showcases a crowd of people surrounding boys of African descent to be able to enter school. These pictures show the suffering of people and make others more tolerant,” he said.

“Photographs correct misconceptions
especially in view of the current control
of social networks on general opinion.”

The responsibility of tolerance lies with those who have the wider vision.
George Eliot, novelist.

Intolerance is the first sign of an inadequate education.
Aleksandr Solzhenitsyn, novelist.

One of the most consistent ways to increase tolerance is contact with the other side and sharing the experience of working toward a goal.
Mark Brandt, psychologist.

If we cannot end now our differences, at least we can help make the world safe for diversity.
John F. Kennedy, politician.

Toleration is the prerogative of humanity; we are all full of weaknesses and mistakes; let us reciprocally forgive ourselves. It is the first law of nature.
Voltaire, writer.