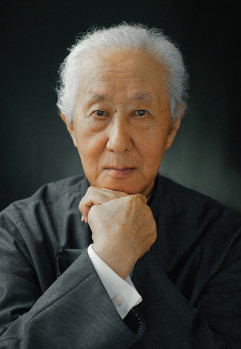 Revolutionary Concepts for the Architecture of Present and Future

Japanese architect Arata Isozaki casts a prolific and influential artistic shadow among his contemporaries. With a body of work spanning a period of huge change and reinvention in Japan during and after World War II (WWII), Isozaki is a globally-renowned figure, one who has managed to avoid being tagged with one specific style.

Isozaki’s work with the great Japanese architect Kenzo Tange helped to shape his aesthetic. His early projects, inf luenced by European experiences, blended New Brutalism and Metabolist styles, as evidenced in the Oita Medical Hall (1959-1960). He developed his own theories on architectural form and vision, which translated into projects involving complex geometry, represented at times by monolithic volumes such as the Pala Alpitour arena in Turin, and at other times by a complex combination of primary volumes such as Kitakyushu City Museum of Art in Japan.

In the 1980s Isozaki embraced postmodernism, interpreting the concept by reinventing lines and forms with colors and experiments, such as his design for MOCA, the Museum of Contemporary Art in Los Angeles. Furthermore, the works he produced for the 1992 Barcelona Olympics and 2006 Winter Olympics in Turin show how his architectural visions have evolved.

He adds: “It was in complete ruins, and there was no architecture, no buildings, and not even a city. I became interested in how architecture and a city can rise up from ground zero. When it comes to a peacetime, you cannot be adventurous, but you are quite mild and tame. However, there is a time when you ought to hit it big and never mind a mistake.”

Isozaki has held conferences and lectures in prestigious places, particularly in the United States. His work has won awards all over the world and has been featured in exhibitions and influential publications. He is now an honorary member of the American Institute of Architects, and Chevalier of the Ordre des Arts et des Lettres.

In his book “The Architecture of the Jumping Universe: A Polemic” (Wiley; 1st edition, April 27, 1995), American cultural theorist, landscape designer, and architectural historian Charles Jencks says of Isozaki: “His Disney Headquarters Building in Orlando, Florida, for Disney executives and employees, is characteristic of this ambiguity. On one level, especially on the exterior. On the inside, the central cylinder is a calm, even frightening, cosmic space, with big stones as a floor and a circle open to the sky above. The cone is sliced in sections by the violent opposition of Florida sunlight and deep shadow. Thus a walk-though sundial, time’s image of creation and destruction, occupies the heart: the sublime in the banal, the sacred in the middle of the Empire of Trivial Pursuits. Here is the counterpart of recent evolution theory: punctuated equilibria, the universe as simultaneously horrific and harmonic” (pp 132-133).

Actually, Jencks description applies not only to Isozaki’s architectural work but also to the formative concepts (and conceptual forms) of the Japanese master, whose works and designs can be seen worldwide.

THE CITY IN THE AIR

One of the revolutionary ideas of Isozaki is his ‘The City in the Air’ project composed of capsules suspended in the air over cylindrical and modular megastructures. These structures permit the expansion and reorganization of the urban space, incorporating or removing units of capsules to satisfy in real time the necessities of the residents. Meanwhile, the foundations of the towers resembled enormous craters left by bombs, inspired by the clouds of smoke raised during the WWII blanket bombings by the United States.

Isozaki believes that “the destiny of the city is ruins. These ruins represent the future of our city, and the future is the ruins.” He adds: “Our contemporary cities…are destined to live only a fleeting moment. Give up their energy and return to inert material.”

At the time when he proposed The City in the Air, Tokyo had limited the maximum height of construction to 31 meters. Isozaki says: “Tokyo is hopeless…I am leaving everything below 30 meters to others. I will think about architecture and the city above 30 meters. An empty lot of 10 square meters is all I need on the ground. I will erect a column there, and that column will be both a structural column and a channel for vertical circulation.”

WHY ISOZAKI WON THE PRITZKER 2019

Explaining why Isozaki was selected as the 2019 Pritzker Prize laureate, Martha Thorne, Executive Director of the Pritzker Architecture Prize and Dean of IE School of Architecture and Design in Madrid, says Isozaki “is an architect with a long and versatile career. He is an architect who did not follow trends, yet evolved constantly over the years. If we look at his early works, and compare them to the middle works and then finally the most recent ones, we see that they are quite different. The one thing that brings them all together is his great searching for the meaning in architecture on one hand and also his attention to those who will be occupying and inhabiting his buildings.”

“A lot of 10 square meters is
all I need on the ground. I will
erect a column there, and that
column will be both a structural
column and a channel for vertical
circulation”.
Arata Isozaki

On the architecture of the present and future, Isozaki says: “There is a time when anything is alright as long as it is interesting. You wonder about what is architecture; the substance, the meaning. The architect is not someone just designing a building, but it is how an architect operates in times to come. For the paradigm shift now, emerges an architect of a new era, an architecture of a new time. We can reveal what was hidden, for things have become too superficial, as we can deepen our understanding. I believe we have such possibilities now.”