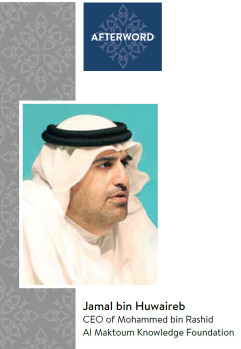 “Translation is the foundation of a cultural renaissance, and opens the doors to
intellectual enlightenment.”
Mohammed bin Rashid Al Maktoum, Vice President and Prime Minister of the
UAE and Ruler of Dubai.

Every day, Arabic proves to be a rich language capable of keeping abreast of the age in which we live. It is a language that can respond to any scientific, cultural, or social development. No surprise, therefore, that the Mohammed bin Rashid Al Maktoum Knowledge Foundation cherishes and fosters Arabic through various initiatives such as Bilarabi and the Dubai International Program for Writing.

“The Arabic language has suddenly begun to be perfect, and this is the strangest thing that has happened in human history. It has neither childhood nor aging,” said the late French philosopher Ernest Renan. This is something we Arabs understand well because it is the language that Allah Almighty has decided to speak to all people through the Holy Quran.

This divine celebration of Arabic has contributed to its spread throughout the world since the great conquests of early Muslims. The language also showed its amazing ability to absorb knowledge that was originally written down in other languages. We all know how translation into Arabic reached its zenith during the reign of the Abbasid Caliph Al-Ma’mun in Baghdad in 830 AD when he ordered translations into Arabic of books on medicine, mathematics, science, astronomy, and philosophy developed by the Greeks, thus enriching the Arabic language and its vocabulary.

At the time of the Renaissance Europe took the opportunity to acquire knowledge of Arabic texts that had been formulated five centuries previously. Europeans translated the best Arabic books to their native languages including: One Thousand and One Nights, the world’s most famous literary fiction collection, translated into French in 1704 by Antoine Galland; The Travels of Ibn Battuta; The Book of Misers by Al-Jahiz; The Improvement of Human Reason by Ibn Tufail; and Muqaddimah by Ibn Khaldun, a founding father of sociology. These books inspired the Europeans to advance modern science and discover its mysteries and secrets and led it to become a beacon of scientific, cultural, and literary progress.

In the Modern Age, around the first quarter of the nineteenth century, Arabs began to read about the most important achievements of Western civilization and have it translated into Arabic. As a result, the Arabic library is full of hundreds of thousands of translated books extending to all branches of knowledge.

There is no doubt that nations cannot progress and develop without knowing the achievements of other peoples, interacting with this knowledge, and adding to it. Translation is the best way to achieve this, so we review in this issue a growing trend of translating Arabic texts into other languages, while celebrating foreign researchers and translators who study Arabic culture as they are the bridges of communication between Arabs and other peoples. There are many other valuable reports in this issue too, I wish you a happy reading.