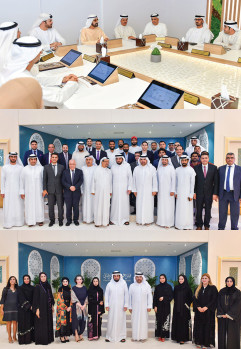 UAE Pushes For Top Rankings in 1,000 Indicators in 10 years

UAE Pushes For Top Rankings in 1,000 Indicators in 10 years

In a bid to further bolster his country’s competitiveness, Vice President and Prime Minister of the UAE and Ruler of Dubai His Highness Sheikh Mohammed bin Rashid Al Maktoum has given directives to all federal and local government entities to step up efforts to reach the top rankings in a thousand world competitiveness indicators over the next ten years.

The remarks by His Highness Sheikh Mohammed came during a visit to Dubai’s Bab Al Shams Resort, where he took part in a meeting of the Federal Competitiveness and Statistics Authority to review the country’s achievements over the past decade. “I congratulate my brother Khalifa bin Zayed on the 10th anniversary of the UAE’s competitiveness push. We have risen to the top positions in the most important indices of education, health, economy, innovation, security and s afety,”said H.H. Sheikh Mohammed bin Rashid. “We started with an ambitious idea and a small team. Today, competitiveness has become an integral part of the government and the country’s modus operandi,” he added. “We look forward to a future decade of competitive innovation. We will build on what we have achieved in the past 10 years. Today, the UAE is in the top positions in the world in more than 300 indicators. Over the next 10 years, we will be in the top ten in more than 1,000 indices. We are confident that young Emirati men and women will achieve the aspirations of our people to make our country the best in the world,” H.H. Sheikh Mohammed concluded.

A Golden Card scheme granting permanent residency to investors, entrepreneurs, specialized talents, researchers, and outstanding students has been unveiled by Vice President and Prime Minister of the United Arab Emirates and Ruler of Dubai, His Highness Sheikh Mohammed bin Rashid Al Maktoum. The Card offers unprecedented benefits to holders and their families, while aiming to foster an attractive environment for business and to promote growth.

“Throughout history, the UAE has opened its door to millions of people seeking to pursue their dreams and better their lives. The Golden Card is our way of welcoming all those seeking to be part of the UAE’s success story and wishing to make it a second home,” said Sheikh Mohammed bin Rashid.

The new permanent residency initiative has identified the first 6,800 qualified expats from over 70 countries to benefit from the scheme. The current investments of those 6,800 residents are estimated at AED100 billion.

Target candidates for this scheme are investors, entrepreneurs, talented professionals, researchers in various fields of science and knowledge, and outstanding students. The initiative aims to attract more foreign investment and stimulate the local economy. It will also increase the UAE’s competitiveness and reaffirm the country’s position as a global incubator of innovation. The benefits of permanent residency will also accrue to the spouse and children of the cardholder to ensure cohesive social ties.

The My Skills 12x12 campaign, the first of a series of initiatives aimed at implementing the United Arab Emirate’s Advanced Skills National Program, has been launched. Endorsed at a recent cabinet meeting, the campaign was launched under the directives and in the presence of His Highness Sheikh Mohammed bin Rashid Al Maktoum, Vice President and Prime Minister of the UAE and Ruler of Dubai.

My Skills 12x12 forms one part of the Program whose overall goal is to foster national talent and empower it to shape the future, face its challenges, and establish UAE as a leader across all sectors. The campaign, which will be rolled out over the coming year, also seeks to engrain the concept of lifelong learning in Emirati society.

“With the strength and dedication of its people, UAE is steadily establishing itself as a leader in all sectors,” said his Excellency Dr. Ahmad Belhoul Al Falasi, Minister of State for Higher Education and Advanced Skills. “UAE opens doors to those who are determined to address challenges and overcome the impossible. Our wise leadership has great faith in the Emirati people’s ability to keep up with future transformations and to master advanced skills to transform our challenges into opportunities,” he added.

The project identifies 12 different skills that are pivotal to transforming and guaranteeing future development of various vital sectors. Advanced skills are broken down into three broad categories: foundational literacies, competencies, and character qualities. Additionally, there is a fourth category, specialized skills, for each sector, which includes such skills as proficiencies in 3D printing, agriculture technologies, designing and programming self-driving cars, and structural engineering.

Ahmed bin Mohammed meets with the employees of MBRF

In the presence of H.E. Jamal bin Huwaireb, CEO of (MBRF), Sheikh Ahmed exchanged congratulations on the holy month of Ramadan, wishing MBRF’s team success and further achievements in the fields of knowledge, writing, reading and promoting the objectives and efforts of the Mohammed bin Rashid Al Maktoum Knowledge Foundation in these fields. During the meeting, Jamal Bin Huwaireb explained the projects and achievements that have been achieved, most notably the Golbal Knowledge Index, the Dubai International Program for Writing and the Dubai Digital Library, as well as therecent updates regarding the Illiteracy Challenge and other investment projects in human capacities.

H.H. Sheikh Ahmed bin Mohammed bin Rashid Al Maktoum praised the performance and loyalty of the employees and their efforts to consolidate the objectives and tasks of the foundation in promoting the knowledge culture in various fields and spreading it in our society and all Arab societies.