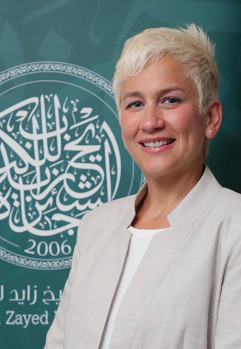 On the Path of Tolerance with Paula

Paula Santillán Grimm has not only worked on academic aspects of translating and teaching Arabic in a number of countries, but through multilingual communication she has built a strong foundation toward a common understanding that espouses the virtues of respect among peoples. Her rich life journey brought her to Abu Dhabi to speak about the great value of tolerance.

Having lived in various countries, she has acquired a treasure trove of knowledge that has forged her visions and ideas about life and her profession, and helped her to build bridges between peoples. A former translator of Arabic, English and Spanish at the United Nations in Geneva, she has developed a strong appreciation of the importance of communication among peoples and the value of adopting a tolerant mindset.

For the latest edition of the Sheikh Zayed Book Award, she was selected to be a member of the scientific committee for the award. In addition, Abu Dhabi TV selected her to present a program ‘Fillers’ that has tolerance as an underlying theme.

In the episode ‘Tolerance at Work’, Grimm says: “Tolerance is not a one-way street, it does not stop at a single station, but extends to all walks of life. In work and employment, it is a path that must not be obscured. Rather, it must be aligned. For that, there should be ways to enshrine tolerance in the work environment and business, in order to succeed and flourish. It should be reflected in the practical functioning of our environment through several aspects, including: ensuring a decent and happy life for different segments of society; establishing respect for the culture of the other; and a legal system that guarantees the rights of each individual and defines his or her duties.’’

“Life taught me during my
academic career and my travels
that tolerance is the key to every
mind and every heart. Let us live
to get to know each other.”

Commenting on her program, which is aired during Ramadan, Abu Dhabi TV said: “In conjunction with the Year of Tolerance, Paula conveys through her program a spirit of tolerance and instills the philosophy and thoughts of good leadership and coexistence in society.”

“My relationship with Abu Dhabi Media began in 2018,” she told Flashes. “At that time, they suggested that I participate in filming a new program about the experience of learning Arabic by non-native speakers who had managed to reach a distinguished level. Then step by step, the idea of me participating in a series on the subject of tolerance took root.” In developing her vision, Grimm drew on her diverse ethnic background, a longstanding relationship with the Arab world, and her experiences of teaching Arabic in a number of countries.

She says: “One of the motives behind this idea is the fact that I find myself immersed in a melting pot of cultures and languages, which is itself a symbol of tolerance. I am Hispanic and my hometown is the city of Barcelona. My father is from Argentina, my grandfather was from Romania, and my grandmother from the former Yugoslavia, with both of them of ethnic German origin. My daughter Salma has a Moroccan father and a Spanish mother, looks Russian, and her second language is Arabic.”

At the beginning of each episode Grimm says: “Life taught me during my academic career and my travels that tolerance is the key to every mind and every heart. Let us live to get to know each other.”

Grimm tells us: “My experience in the media means a lot to me for several reasons: First, it fulfills a childhood wish to be an actress. I have taken acting lessons since I was 10 years old in Barcelona; I participated in plays during local festivals and in the streets of the city. In Damascus I filmed two ads on Syrian TV (During the month of Ramadan too!). In the end, I did not become an actress, but this foundation in acting has helped me a lot during my life. I’m not shy in front of cameras, and I’m not afraid of verbal expression in front of a large audience. Acting also helped me to develop my skills as a teacher and as an interpreter in terms of pronunciation.”

She added: “The second reason is that I feel a strong sense of pride when I think that I was chosen to represent the moral value of the year 2019, tolerance, and also when I think of all the time I have invested to enable me to express, think, and feel in Arabic which is the most beautiful and the most difficult language in the world! I experience an indescribable feeling and feel chills when I realize the value of this experience practically and morally.”

“If I want to add a third reason,” says Grimm, “it’s just to enjoy the visual experience as an event that adds new life to a woman who has lived a lot of unique and enjoyable experiences and adventures around the world.”

Experiencing unusual contexts and engaging professionals working in fields totally different from her own helps her to develop herself more, she believes. “It is a kind of learning that is not taught at the best universities and offers a lot of life benefits,” she said.

Grimm considers learning a new language to be an expression of tolerance in itself. “Why? Because the principle of tolerance is based on getting out of the comfort zone...Learning a different language not only provides us with the vocabulary and rules that enable us to communicate seamlessly with new people, but also provide us with an opportunity to learn different perspectives and even to delve deeper into our native language.”

She presents her thoughts on life and experiences on her website (cashida.net), which is a space for her to communicate with others as well as learn about their experiences. She concludes her interview saying: “It is positive for a person to realize that the thing he considers ‘ordinary‘ may b e a unique phenomenon in another language, and thus reflects a different way of thinking by another human being. The more we learn about cultures, including its languages, the more our cognitive and human boundaries expand. No limits to knowledge and humanity.”

“To treat every person, no matter what his creed or race, as a special soul, is a mark of Islam.”
The Late Sheikh Zayed bin Sultan Al Nahyan.

“We look forward to further contributing towards building societies that believe in the values of tolerance, cohesion and dialogue, and establishing concrete models improving tolerance and co-existence both regionally and internationally.”
H.H. Sheikh Khalifa bin Zayed Al Nahyan, President of the UAE.

“We emphasized many noble values in the Zayed school, the most important of which is tolerance. The UAE will continue to model openness, acceptance, and understanding of others’ requirements.”
H.H. Sheikh Mohammed bin Rashid Al Maktoum, Vice President and Prime Minister of the UAE, and Ruler of Dubai.

“The UAE, through its policies and models in the region, sends positive messages about the need for tolerance, co-existence and joint development work to address the many challenges facing us in the international community.”
H.H. Sheikh Mohammed bin Zayed, Crown Prince of Abu Dhabi and Deputy Supreme Commander of the UAE Armed Forces

“The UAE has played a leading role in promoting the values of tolerance on the global scale thanks to wise leadership to support the approach of coexistence and peace.”
H.E. Sheikh Nahyan bin Mubarak Al Nahyan, Minister of Tolerance.