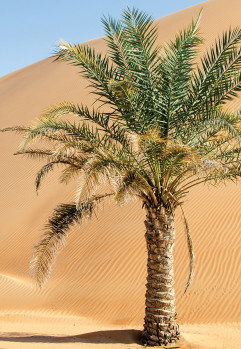 Uncovering the Mystery of Date Palm Wilt in UAE

“Serious diseases are caused by pathogenic fungi, low production and a disabling, adverse, environment”… Reasons that led my research team from the College of Science in United Arab Emirates University (UAEU) to conduct significant research to address the challenges facing date palm, of which UAE is one of the top 10 producers globally.

In an interview with Flashes, the research team members noted that date palm production in UAE fell by 18 percent between 2010 and 2016 just as demand for dates continued to increase and surpass annual yields. With UAE a leading country in producing and exporting dates, it is very important to address the ongoing and growing threats to date palm production.

Abu-Qamar explained that palm trees generally suffered from serious diseases caused by fungi and insects, with fungi representing a primary cause of disease. The use of chemicals continues to be the major strategy in mitigating the menace of palm trees diseases, he said.

He added that the research team had successfully administered a fungicide called Cidely® Top to restrict the growth of the fungi and kill it. The fungicide proved efficient in laboratory studies.

“This research could be the
first report that confirms that
chemical fungicide Cidely® Top is
highly effective against palm trees
sudden death disease”.
Professor Synan Abu-Qamar

Abu-Qamar, a professor of biology at UAEU’s College of Science, continued that recent studies showed the fungicide to be equally effective in experiments conducted in greenhouses. “This research could be the first confirmation that the chemical fungicide Cidely® Top is highly effective in combating palm trees sudden death disease,” he said.

Explaining the study’s motivation, Abu-Qamar said: “In UAE, the causal agent behind palm trees sudden death was uncertain for years because scientists lacked knowledge about what specific kind of fungi caused the disease, or how the fungi’s symptoms were mixing in with other symptoms caused by different wilt diseases.”

Even though SDS in palm trees had been widely reported to negatively affect date palm plantations in the country, the causal agent was ambiguous and disputed amongst researchers.

Thus, the research team wished to identify the primary cause to enable researchers and then discover the best fungicides to apply to kill the fungi and protect palm trees from the disease.

The symptoms of infection can be seen initially on palm fronds or leaves, depending on the severity of the disease, explained Professor Abu-Qamar. Initial symptoms are seen on the rachis (frond’s midrib). Usually the affected leaves turn pale green and then a yellowish color at the base of fronds, before moving upward.

“The discoloration progresses, becomes white on one side of the frond until the whole leaf is completely white,” he added. “These symptoms result in wrinkles appearing at the end of leaves. The leaves become dry before eventually dying. The process takes anything from a few days to many weeks. Besides the fungi, similar symptoms can be seen on younger leaves. As soon as SDS symptoms are seen, it is hard to stop it,” he said.

Research associate Professor Khaled Abbas El- Tarabily, from UAEU Al-Ain College of Science’s Department of Biology, explained that the disease was treated by isolating the damaging fungi from the roots of infected palm trees through the creation of a specialized nutritional environment. The fungi were identified by isolating the DNA, then using sequential polymerization (PCR) and phylogenetic analysis.

Professor E l-Tarabily t old F lashes that the t eam identified three types of causal agent fungi. After testing the ability of each agent to infect palm trees within greenhouses, the study showed that only one kind of fungus—F. solani—was efficient and powerful in causing the disease.

Next, the team selected and tested several fungicides in the laboratory for their effect on fungus growth. The study proved that the most effective of the fungicides was Cidely® Top. They then applied the fungicide to the SDS-infected palm trees. It turned out that a concentration of 250 ppm Cidely® Top could successfully treat the disease, killing the causal agent.

Professor El-Tarabily said that the aim of the study was to isolate and identify the fungal pathogens that causing SDS, evaluate the effectiveness of available fungicides to protect palm seedlings from it, and recommend effective programs to manage agricultural pests. S ound horticultural practices, including regular maintenance and proper fertilization, are also recommended to increase the health and vigor of date palm trees, he added. Such practices include pruning and refining the infected parts, and burning the infected fronds.

According to Professor El-Tarabily: “Since many fungal pathogens invade host tissues through mechanical injury or natural openings, wounds should be avoided, and there should be no cut or intermittent parts of palm trees while they are trimmed”.

He stressed that the use of chemicals continued to be an important component in a strategy to mitigate the menace of crop diseases, despite the ecological and public health concerns it raised.

Thus, the study recommended spraying palm trees with fungicides like Cidely® Top that contain diniconazole and sulfonamide, the substances the study showed to be sufficiently effective in decreasing levels of SDS in the early stages of the disease.

This would work by secreting natural antibiotics and enzymes to decompose the cellular wall of the pathogenic fungi, thereby killing it. The researchers concluded that confirming this alternative method would create a more environmentally-friendly solution than the use of chemical pesticides.