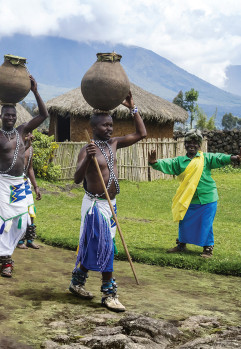 A quarter of a century ago, the economy of Rwanda was in ruins, severely depressed by a genocide that killed an estimated 800,000 Rwandans. However, since President Paul Kagame’s Rwanda Patriotic Front (RPF) seized political power in 199 this tiny East African country has enjoyed a reversal of economic fortune.

The genocide had triggered a precipitous 58 percent decline in Rwanda’s Gross Domestic Product (GDP). After capturing power, President Kagame adopted an ambitious plan aimed at turning his country into the ‘Singapore of Africa’ and signed an enhanced structural adjustment facility with the International Monetary Fund (IMF). Under the IMF agreement, Rwanda received low interest loans to finance its development programs.

The IMF, assisted by the World Bank, guided the country in developing a privatization program. The structural reforms that Rwanda undertook in the post-genocide era put the nation on a steady path to growth, the World Bank has said.

Former President of the African Development Bank, Donald Kaberuka, said in 2000, while still Rwanda’s Minister of Finance and Economic Planning: “The 1994 genocide devastated the Rwandan economy as well as its population. GDP was halved in a single year, eighty percent of the population was plunged into poverty, and vast tracts of land and livestock were destroyed. The genocide also exacerbated a number of development constraints that had existed before 1994.”

In 2000 President Kagame launched the Rwanda Vision 2020, an ambitious plan to transform Rwanda’s economy into a middle-income country with a per capita income of about US$900 per year.

The program set a goal of an annual growth rate of at least 7 percent. With its population of nearly 16 million dependent on subsistence agriculture, the government sought to transition the economy away from a subsistence agriculture-based one to a knowledge- based society, with high levels of savings and private investment, thereby reducing dependence on external aid.

Dr. Fredrick Golooba Mutebi, an independent economic analyst and researcher who has done some work for the Rwandan government, attributes this sustained growth to a focus on developing previously neglected sectors.

“Rwanda started from a very low level of growth but started to steadily grow with investments in sectors that before the genocide were not contributing to the economy. For instance, there has been substantial investment in the tourism sector which has made tourism one of the key contributors to the economy,” Dr. Mutebi said.

Rwanda’s earnings from tourism increased from about 2.4 percent in 1998 to 12.7 percent in 2017. The sector is reported to be growing at an annual average rate of 10.3 percent.

The World Bank attributes the growth to the government’s commitment to developing tourism, including by making Rwanda a safe destination for visitors.

Dr. Mutebi also highlights the government’s investment in the mining sector, which hadn’t been well developed in the pre-genocide era.

According to the 2019 CIA World Factbook, Rwanda consistently
ranks highly for ease of doing business and transparency due to the
government’s adoption of an expansionary fiscal policy, poverty
reduction efforts, and investments in education and infrastructure.

“Contrary what is being said in some circles that Rwanda is plundering Congolese minerals, Rwanda has a thriving mining industry. There has been a significant investment, which has contributed to Rwanda’s increased mineral exports,” Dr. Mutebi said.

The New Times, a government-owned newspaper, citing statistics from the Rwanda Minerals, Petroleum and Gas board, reported that mineral exports exceeded expectations in 2017, climbing to $373 million compared to $166mn the previous year— surpassing the government’s own target by $133mn.

With a majority of its population dependent on agriculture, the government pushed to increase productivity in the sector. It also promoted investment in the energy, water, telecommunications, and transport sectors with the goals of lowering costs while increasing quality and reliability. Efforts were made to raise education and healthcare standards, helping to create a more efficient and productive workforce.

According to the 2019 CIA World Factbook, Rwanda consistently ranks highly for ease of doing business and transparency due to the government’s adoption of an expansionary fiscal policy, poverty reduction efforts, and investments in education and infrastructure.

The country’s willingness to tackle corruption has been another important factor.

“Economic growth is based on the capacity of people to do things fast; to produce fast and at a limited cost. Rwanda has structural problems of being landlocked, and, when you put corruption in the equation, it becomes a major structural problem. Corruption creates inefficiency in productivity because when you have corruption, you remove competence, and you lose quality,” said Thierry Gatete, a senior research fellow in governance at Rwanda’s Institute of Policy Analysis and Research.

The Rwandan government adopted a strict anticorruption policy, which has attracted a number of foreign direct investments that have spurred economic growth.

“There was a reform of commerce regulations. Legal requirements related to doing business in Rwanda that previously were the responsibility of various ministries and government departments were centralized in one entity, the Rwanda Development Board, which became a one-stop-shop for everyone intending to do business in Rwanda,” Gatete said.

This reduction in red tape for investors has made for a more investment-friendly business climate in Rwanda.

“Without corruption, you can do things faster here; move goods, people and money faster,” Gatete said.

By June 2018, it had however become evident that some of the targets set out in the Rwanda Vision 2020 would not be achieved. In response, the government has revised its development strategy and set new targets in a follow-up plan called Rwanda Vision 2035.

The IMF has advised the government to continue building up foreign exchange reserve buffers to enhance resilience, while working to identify and mitigate potential fiscal risks.

The IMF further stated that for Rwanda to realize its goal of becoming a middle-income nation by 2035, it needed to regain momentum in mobilizing domestic revenue as a reliable source of financing for development.

“The ambitions we had for 2020 were too high,” said Dr. Mutebi. “We need to re-strategize based on our performance in implementing the Economic Development Poverty Reduction Strategy [EDPRS].”

Under EDPRS 1, Dr. Mutebi said, about one million people were lifted out of poverty.

“About 95 percent of the targets we set in EDPRS 1 and 2 were achieved. Rwanda is very good at policy implementation, it doesn’t stop at policy formulation,” Dr. Mutebi said.