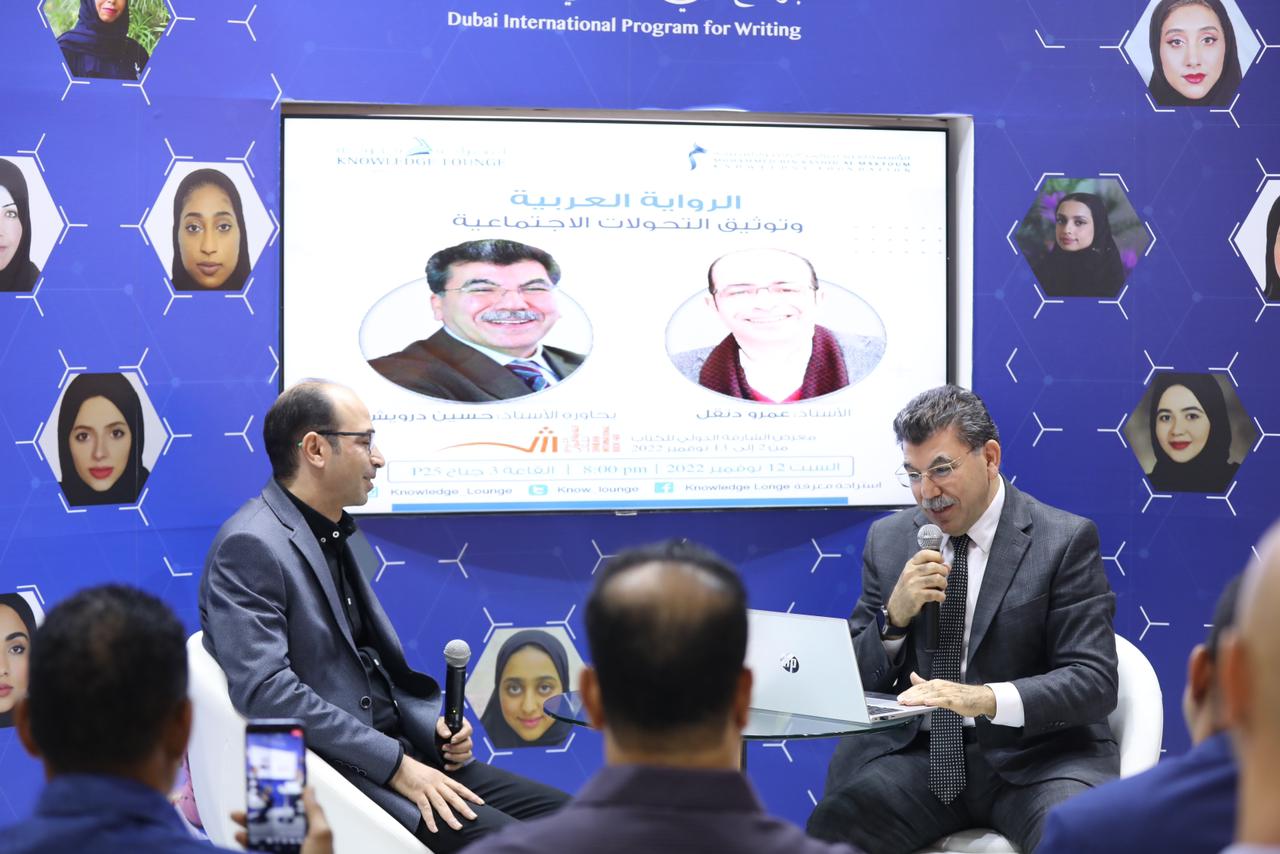 November 15, 2022 – The Mohammed bin Rashid Al Maktoum Knowledge Foundation (MBRF) concluded its participation in the 41st edition of the Sharjah International Book fair, which was organized by the Sharjah Book Authority, from November 2 to 13, 2022, at the Expo Centre Sharjah. On the last two days of the event, the Foundation hosted several sessions as part of the ‘Knowledge Lounge’ sessions, one of which is ‘The Arabic Novel between Narrative Criticism and Reading Spread’ moderated by Rola Al-Banna, featuring writers such as Jalal Barjas and Shahla Al-Ajili. During the session, Jalal Barjas emphasized that the Arab world has been greatly influenced by world literature. Shahla Al-Ajili, on the other hand, stated that because of the prevalence of fiction in the Arab world, creative writers may go unnoticed, noting that some Arab writers choose international institutions since they adhere to specified requirements in promoting writers.

The Foundation also organized sessions like ‘Arab Reading Clubs’ and ‘Embassies of Arab Readers’, along with announcing the launch of ‘Paris Knowledge Lounge’, in collaboration with the Arabotac. The sessions were attended by several prominent personalities Nassima Belaroussi, Maryam Muwafaq, and Rola Al-Banna.

Furthermore, the activities held during the final two days of the international book fair also entail sessions including ‘Reading for Young People in Knowledge Societies’, which was hosted by Rola Al-Banna and Zainab Al-Qaisi. In the course of this session, Al-Qaisi elaborated that reading must be encouraged and adopted as a habit, as well as a way of life, whereas Al-Banna pointed out that currently the majority of young people read works in foreign languages more often than they do in Arabic, signifying that some publishing problems create a gap between foreign languages and Arabic. The session also announced the collaboration of Knowledge Lounge and the Naqsh platform, during which Al-Qaisi noted that the Naqsh platform has more than 2,000 registered readers. Al-Banna emphasized that the Knowledge Lounge strives to encourage young people to read in a free and open manner.

His Excellency Jamal bin Huwaireb, CEO of MBRF asserted that the Sharjah International Book Fair has paved the way to solidify its position on the global map for knowledge. He expressed his happiness to have participated in the event, which contributes to consolidating Sharjah’s position as the breeding ground for knowledge, thought, literature and culture. Bin Huwaireb emphasized that the MBRF will further participate in various knowledge forums, particularly the significant events hosted by the UAE, as they enhance the state's leading position on the global knowledge map, allows for reshaping the future of knowledge, and remove barriers that obstruct access to knowledge content.

Additionally, the Foundation also organized ‘Arabic Novel and Documenting Social Transformations’ session, featuring an interview of the novelist and storyteller Amr Donqul by the journalist and poet Hussein Darwish. During the session, Donqul stated that the novel is a major part of Arabic literature and added that the reader is the main critic of fictional works. Donqul cited that continuous and regular reading is what drives a writer to craft a story. He also mentioned that when great writers created a novel, it was adapted into a film. Donqul discussed his book ‘The Forty Club’, which was first published during the Covid-19 pandemic, highlighting that it is an effort to provide answers to problems that we have long sought.

A significant number of people visited the MBRF stand during the Sharjah International Book Fair, in addition to several official and student delegation visits. The event provided the MBRF with a strategic forum to present its knowledge initiatives and programs, as well as to explore the potential for collaboration with publishing, printing, and knowledge institutions, thereby enhancing the Arab knowledge content. Furthermore, the MBRF also showcased its Arabic or translated book volumes in conjunction with organizing specialized events and seminars.