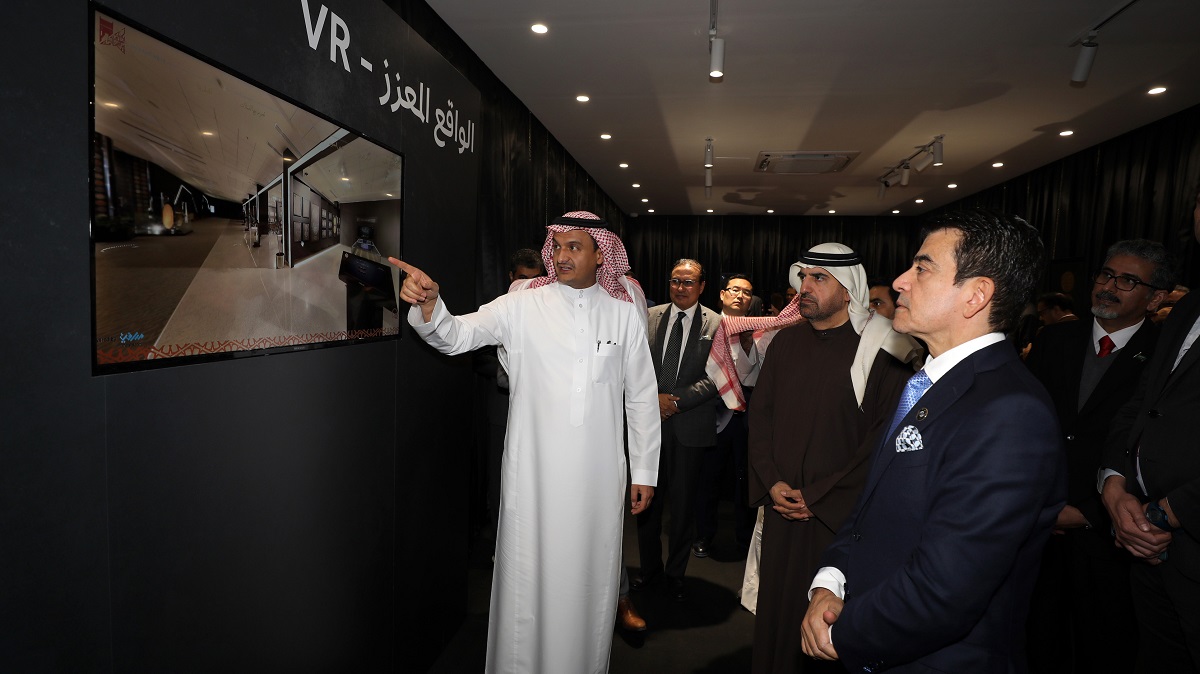 December 23, 2022 – The Mohammed bin Rashid Al Maktoum Knowledge Foundation (MBRF) participated in the first consultative meeting on ‘Strategic Indicators for Development in the Islamic World: Global Knowledge Index as a Model’ at the headquarters of the Islamic World Educational, Scientific and Cultural Organization (ICESCO). The meeting emphasised the significance of the Global Knowledge Index (GKI) as a standard to assess the knowledge performance of countries across the globe, as well as determine the changes and challenges encountered by these countries.

The two-day meeting, which was held by ICESCO in collaboration with MBRF and United Nations Development Programme (UNDP), was attended by various high-level ministers, as well as officials and representatives of ICESCO member states, international organisations, and institutions.

His Excellency, Jamal bin Huwaireb, CEO of the MBRF, emphasised that ICESCO significantly contributes to their efforts towards elevating the status of the Arabic language, promoting knowledge, and encouraging youth to build knowledge societies. HE pointed out that the Knowledge Index is a global resource that helps decision-makers and others involved in the field of knowledge development, to evaluate knowledge performance in their nations and the rest of the globe. The Index also offers countries and institutions with precise tools and data on knowledge development opportunities and challenges, highlighting the most significant knowledge challenges faced by countries around the world. Through this, they aim to promote knowledge, achieve sustainable development as well as the goals of 2030, in addition to encouraging the youth to participate in knowledge-based developments.

Dr. Salim M. AlMalik, Director General of ICESCO, noted that currently, the strength of a country is determined by how well they are developed in the field of technology and scientific research. He stated that with several advancements across the globe, it is necessary for countries to promote and encourage various paths of knowledge, in order to achieve growth, adding that this development relies heavily on human abilities and capabilities. “This necessitates several changes in the mechanisms of scientific research, as well as development of individuals to promote knowledge. While certain Islamic nations have made significant progress in the knowledge index, other nations are yet to give their necessary statistics and data,” he added.

Meanwhile, Dr. Hany Torki, Chief Technical Advisor and Director of the Knowledge Project at the United Nations Development Programme (UNDP), commended ICESCO’s constant efforts to promote cultural and knowledge development in the member states of the organisation. He further evaluated the significance of GKI that includes 37 ICESCO Member States.

Dr. Ayman Ashour, Egyptian Minister of Higher Education and Scientific Research, underlined the significance of knowledge development and its positive impact on all facets of life during a ministerial session held in the meeting, which also covered the challenges of knowledge in the Islamic world. He also assessed Egypt's efforts to invest in human capital and its accomplishments in scientific research in 2022. During this session, Dr. Patrick Mouguiama-Daouda, Minister of Higher Education, Scientific Research, Technology Transfer and National Education, the Gabonese Republic, emphasised the importance of advancing knowledge and promoting the exchange of experiences, to encourage youth, women, and various underserved populations. Furthermore, Dr. Abdellatif Miraoui, Minister of Higher Education, Scientific Research and Innovation of the Kingdom of Morocco, highlighted the significance of staying current with advanced technologies, the value of social and human sciences, as well as drawing in young talents.

At the end of the session, a discussion was held where several secretaries general of Member States’ National Commissions raised a lot of questions and provided useful suggestions on the session topic.

The second day of the meeting featured a series of brainstorming sessions, which focused on launching initiatives that enhance knowledge in the Islamic world, in addition to presenting several proposals on various challenges of pre-university education. These sessions were attended by prominent figures - including Dr. Najwa Grace, an expert at the United Nations Development Programme (UNDP), Dr. Koumbou Bolly Barry, Head of the Education Sector at ICESCO, and Ramata Almamy Mbaye, Head of the Sector of Human and Social Sciences at ICESCO. Additionally, it also aimed to put forth proposals on higher education challenges and issues. These sessions were attended by Dr. Hany Torki, Chief Technical Advisor and Director of the Knowledge Project at UNDP, Dr. Omar Halli, Advisor to the Director-General (DG) for the Federation of the Universities of the Islamic World (FUIW), and Dr. Idris Ouaisha, a former Moroccan minister, a university professor, and an academic researcher. Proposals for technical education issues were also developed during a brainstorming session, which was attended by Dr. Youssef Siddique, an expert at UNDP, and Dr. Raheel Qamar, Head of the Science and Technology Sector at ICESCO. The agenda of the second day concluded with a consultative session with the participation of several Secretaries from the national committees.