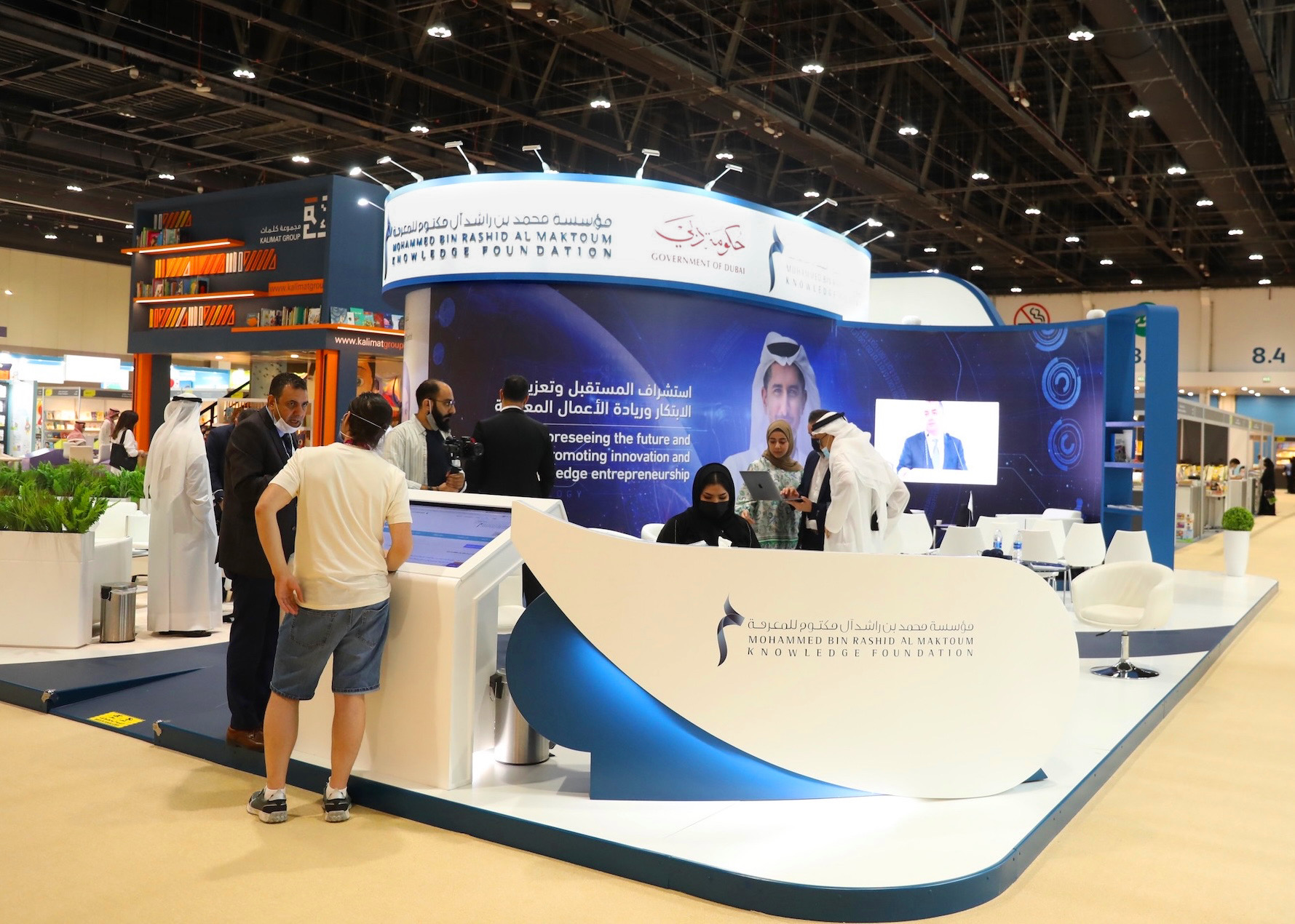 Dubai, UAE, May 24, 2022 – The Mohammed bin Rashid Al Maktoum Knowledge Foundation (MBRF) hosted a wide range of events during its participation in the 31st edition of the Abu Dhabi International Book Fair. The events took place in the presence of various renowned Emirati and Arab writers with extensive knowledge and talent. The Foundations participation was in line with its mission to promote knowledge mobility and develop human capital.

On the first day, the Foundation's pavilion witnessed an interactive session within the ‘KnowTalks’ Series 2022, entitled ‘The Importance of Research in the Development of Societies.’ The session was conducted in collaboration with its Global Knowledge Partner- the United Nations Development Program (UNDP), in the presence of Dr. Fatima Al Shamsi, Academic Researcher and Economic Expert. The session was moderated by Dr. Hayel Obeidat, Senior Consultant, G42-HYT.

Al Shamsi highlighted the importance of scientific research in economic, social, and institutional development. She pointed out that developed countries rely on scientific research as a measure for policies and productivity in all aspects of life, as it plays an important and supportive role in economic and social progress. She further mentioned how applied research is a key tool in providing solutions to security, social, and economic problems.

Al Shamsi explained that the components of scientific research depend mainly on decision makers' perception of the importance of this sector. She mentioned that the government expenditure on scientific research must be in excess of 2 per cent of the GDP, according to UNESCO, so that the state can achieve advanced economic growth and provide qualified human resource capable of developing and analyzing data, as well as advanced infrastructure.

Al Shamsi highlighted the scientific research sector in the Arab region, stressing that the Arab countries are nowhere near the global competition due to many challenges. The most prominent one being the significant lack of a culture of scientific research, lack of funding, lack of policies and systems monitoring research and development, and the low numbers of researchers. She also noted that the percentage of researchers in the Arab region is 450 per million inhabitants compared with 5 thousand researchers per million people in European and developed countries.

Al Shamsi praised the UAE's keen interest in scientific research over the past few years, recognizing its importance as a key component of the knowledge economy. The UAE has been able to upgrade its ranking in the knowledge index to No. 11 in 2021, owing to the twofold increase expense on scientific research and other sectors focused on creativity and innovation. She also applauded the interest of the wise leadership in supporting academic institutions and government and private research centers, citing how this has increased scientific research from 15,000 during the period 1996 to 2010, to more than 57,000 over the past few years with a growth rate of 14 per cent.

She added, “The number of Emirati researchers increased from 18,343 in 2015 to 22,911 in 2018. This number is expected to rise, especially under government policies and strategies that promote scientific research. This has led to a remarkable development in the quality of UAE’s scientific research, which is evident in the various research being published in the world's leading scientific journals.”

In the light of the ‘Knowledge Lounge’ initiative-- one of the Foundation's initiatives aimed at inspiring the culture of reading and integrating it into everyday life in all emirates of the country and Arab States, a panel discussion, entitled ‘In the world of knowledge, Books Awards and the Universality of the Arab Book’, was held with the participation of Dr. Shukri Al Mabkhout, a university professor and a Tunisian writer, Winner of the International Prize for Arabic Fiction in 2015 and the King Faisal Prize in 2018; Tariq Imam, an Egyptian novelist shortlisted for the International Prize for Arabic Fiction 2022 and winner of several literary awards; and Bushra Khalfan, an Omani writer and novelist also shortlisted for the International Prize for Arabic Fiction 2022. The session was moderated by Dr. Jamal Maqableh, a university professor and literary critic.

The second day of the exhibition will see the hosting of an interactive seminar on ‘Cyberbullying’ and a panel discussion on the comic collection ‘Ajin Al Hanin’ under the Dubai International Program for Writing- one of the initiatives of the Foundation aimed at encouraging and empowering young talents who possess the talent of writing. The second day’s agenda also features an interactive session under the ‘Knowledge Lounge’ initiative, entitled ‘Discoveries of Arab Travelers in Western countries’, where the great Syrian poet Nouri al Jarrah will be hosted and interviewed by the journalist and poet Hussain Darwish.