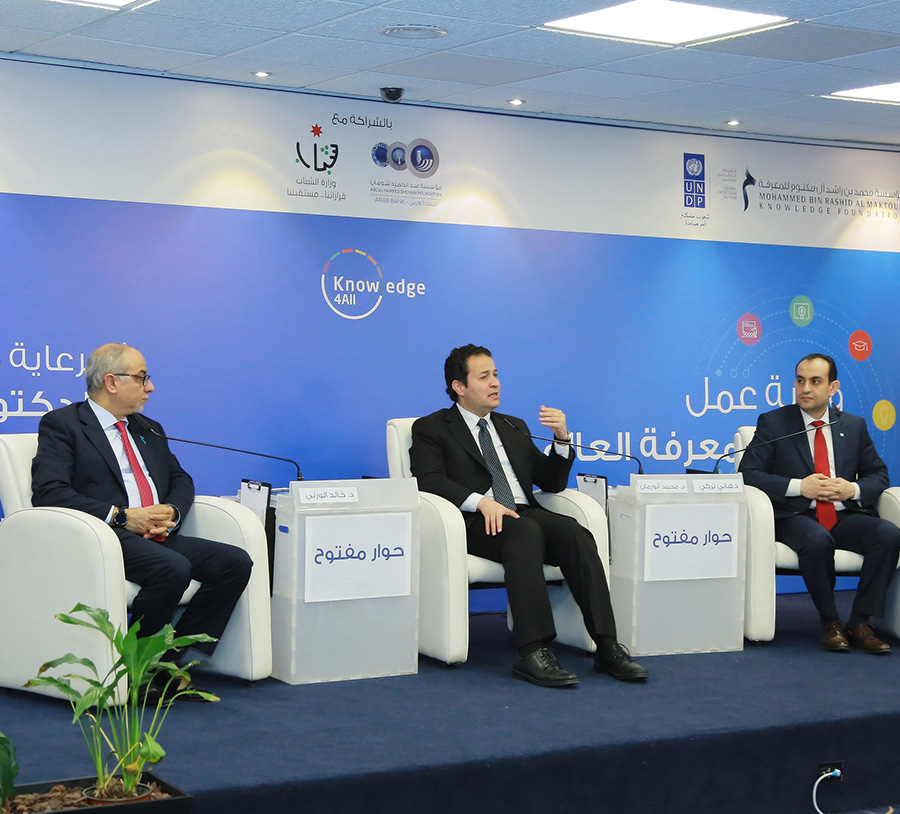 The Mohammed Bin Rashid Al Maktoum Knowledge Foundation (MBRF) and the United Nations Development Programme (UNDP) have concluded Knowledge Week in Jordan, which was held last week, in the capital Amman, in collaboration with the Jordanian Ministry of Youth and the Abdul Hameed Shoman Foundation (AHSF).

With several prominent Jordanian universities and 750 college students attending, the week’s activities included announcing and discussing the findings of the Global Knowledge Index 2018 (GKI), focusing on the metrics pertaining to Jordan, and discussing ways to improve the country’s knowledge performance on the level of the seven sectors covered by the Index. Also on the agenda was the announcement of several workshops as part of the “Know Talks” programme, launched by MBRF at the Knowledge Summit 2018.

Knowledge Week Jordan kicked off with a series of sessions with university students and professors at the Hashemite University and the University of Jordan, followed by a Global Knowledge Index 3-Day Workshop for youth selected from all provinces of the kingdom. The objective of the workshop was to empower the youth to explore innovative ideas that tackle development challenges. Participants were provided with critical knowledge tools to build their future vision of Jordan and create a meaningful impact. The starting point was the performance of Jordan on the Global Knowledge Index 2018 on the level of the seven sectors: pre-university education; higher education; technical and vocational education and training; research, development, and innovation; information and communications technology; economic; and general enabling environments.

In collaboration with the Abdul Hameed Shoman Foundation and the Ministry of Youth and under the patronage of Jordanian Prime Minister H.E. Dr. Omar Al Razzaz, the workshop lasted for three days and sought to motivate the young participants to outline plans of action to address challenges preventing the establishment of a knowledge-based society in Jordan. The event closed with a ceremony that brought representatives from ministries, government departments, media outlets, research institutions, and private companies, together with university students from all around the country.

Jordan’s Minister of State for Media Affairs and Communications, and Government Spokesperson Jumana Ghunaimat addressed attendees at the workshop on behalf of Prime Minister Al Razzaz – the event’s patron – asserting young people’s role in building a knowledge-based society and reiterating Jordan’s commitment to investing in human beings and developing education in the kingdom. H.E. Ghunaimat thanked MBRF and the UNDP for choosing Jordan to host Knowledge Week, noting that the Jordanian Government intends to benefit from the Retreat’s outcomes and the findings of the Global Knowledge Index to avoid falling behind on the Fourth Industrial Revolution.

For his part, Jordan’s Minister of Youth and Culture Dr. Mohammed Abu Rumman announced the Ministry’s intentions to adopt several knowledge initiatives rooted in the outcomes of the GKI Workshop and Knowledge Week and to provide full support for these initiatives through youth centres spread across the kingdom.

Meanwhile, MBRF’s CEO H.E. Jamal bin Huwaireb lauded the outcomes of Knowledge Week Jordan, describing them as “in line with the strategic objectives MBRF and UNDP hope to achieve from holding such initiatives around the world, which include spreading the findings and recommendations of the Global Knowledge Index, and fostering a meaningful exchange of knowledge, expertise, and best practices.”

On a similar note, Saif Al Mansoori, Corporate Affairs Advisor to the Managing Director of MBRF, asserted that the Knowledge Week in Jordan is a continuation of the Knowledge Summit, and a comprehensive platform that brings together experts and decision-makers to present visions, exchange ideas and explore best practices in knowledge production.

Valentina Kassisieh, CEO of the Abdul Hameed Shoman Foundation, said: “Today, we celebrate a group of young Jordanians who, over the past two days, worked to lay the foundations for a global knowledge base that promotes innovation in both education and scientific research.” Kassisieh then called for fostering a complementary relationship between scientific research centres and knowledge institutions.

The workshop also saw Khalid Abdul Shafi, Director of the UNDP’s Regional Bureau for Arab States, highlight the latest accomplishments of the Programme’s partnership with the Mohammed Bin Rashid Al Maktoum Knowledge Foundation – particularly, the Future of Knowledge Report launched during the most recent Knowledge Summit. The Report provides a pilot survey covering 20 countries and exploring the sectors that will shape the knowledge societies of the future, as well as a new data-powered knowledge-measuring tool.

The workshop concluded with an open dialogue on “Media as a Source of Knowledge”, bringing the young participants with H.E. Jumana Ghunaimat, as well as an open session to discuss Jordan’s results in the Global Knowledge Index. Furthermore, MBRF and UNDP announced that two of the teams participating in the workshop had won an opportunity to attend the Knowledge Summit 2019 in Dubai and participate in setting its topics of discussion.