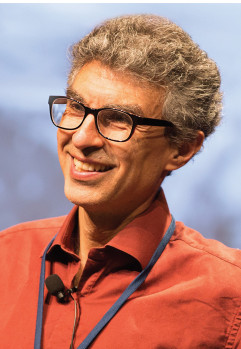 Artificial Intelligence or AI is a relatively new realm of study. But there are pioneering scientists who have devoted much of their life to it since the 1990s and Yoshua Bengio is one of them.

As the world enters a Fourth Industrial Revolution, AI is intruding not just into our workplaces and other public spheres where its possibilities are abundant, but even into our bedrooms. Starting with deep learning, Bengio has become the human face of AI by spearheading projects that can help humanity in the long run. The 55-year-old Paris-born Canadian has brought new dimensions to this field of study, which has taken the tech world by storm.

Bengio’s breakthrough work in the field was A Neural Probabilistic Language Model. Co-authored by three others and published in The Journal of Machine Learning Research in 2003, the study focused on the joint probability function of sequences of words in a language.

In 2018 he became the computer scientist with the largest number of citations in the world, with Google Scholar recording it as over 130,000, and counting.

A humanitarian approach to AI

Bengio, a recipient of several awards, including the 2018 Turing Award, along with his laboratory at the Montreal Institute of Learning Algorithms (Mila), are on a mission to bridge the gap between AI and society by advancing a sustainable, pro-human approach.

His AI for Humanity projects have already made a deep impact on disaster management, agriculture, the environment, promotion of diversity, and tackling gender bias in texts.

He is highly ambitious about the possibilities of AI, especially in healthcare applications.

In an interview with IBM, he said: “It could have a huge impact on everyone’s health, for example in tackling cancer, which is the main k iller in our societies. AI will allow for much more personalized medicine and will bring a revolution in the use of large medical datasets. We’ll see patient-specific treatments which are much more likely to work— for example, ones created using your genomic and expression data. Currently, we are using very blunt instruments to treat patients. This has the potential to change a lot. And we’ll also see a much more efficient use of doctors’ time.”

Element AI, a Montreal-based AI incubator he cofounded in 2016 and which can produce real-world business applications, is another one of Bengio’s big contributions to the field.

A year later, he joined Botler AI, a startup based in Montreal, as a strategy adviser. Bengio, who has been named an ‘Officer of The Order of Canada’, currently serves as scientific and technical adviser for Recursion Pharmaceuticals, a tech-first life science company.

His findings have also revolutionized the world of computer vision and computer graphics.

According to the Association for Computing Technology, which bestowed Bengio and two others with the Turing Award, which has been dubbed the Nobel Prize for computing, one of his computer applications can create “original images, reminiscent of the creativity that is considered a hallmark of human intelligence.”

The introduction of AI into industrial production has raised the specter of super-intelligent machines erasing humans at workplaces. But several experts have ruled out this possibility because machines, be it AI or deep learning or any ordinary machine, cannot function without the input of human intelligence.

In Bengio’s words, the applications that industrial systems have derived from deep learning “such as speech recognition, machine translation, image search, self-driving cars, vision systems for blind people, etc. take advantage of progress in deep supervised learning. Yet humans are very good at unsupervised learning and we need to make substantial progress in that direction to approach human-level AI.”

Asked how computers could develop their reasoning to reach the level of a human, he said: “It is difficult to say. Knowledge graphs were designed to be curated by humans but we may need to learn other forms of representation that are more amenable to being extracted from data automatically—from documents, for example— by deep neural nets.”

‘Neural networks’ refer to systems composed of layers of relatively simple computing elements called neurons that are simulated in a computer.

However, some AI technologists are optimistic about figuring out the reasoning challenge in the next five to ten years and assert that deep learning might actually be part of the solution. Which means, the world expects more from Yoshua Bengio.

A graduate in electrical engineering, Yoshua Bengio did his postgraduate studies in computer science and later obtained a PhD in computer science from McGill University, a public research higher education institution in Montreal, Canada. According to his website: “Since 1993 he has been a professor in the Department of Computer Science and Operational Research at the Université de Montréal. In addition to holding the Canada Research Chair in Statistical Learning Algorithms, he is the founder and scientific director of Mila, the world’s largest university-based research group in deep learning.”

Mila has placed Montreal at the top of the AI ecosystem, leading some major companies and several AI startups to establish labs there.

Bengio is considered as one of the three people most responsible for advancing deep learning in the 1990s and 2000s, the other two being Geoffrey Hinton and Yann LeCun, with whom he shared the latest Turing Award.