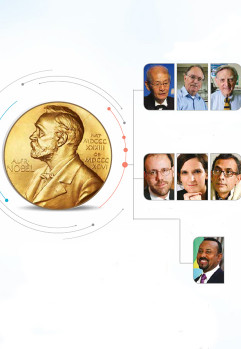 The 2019 Nobel Laureates: Why They Were Chosen

Last month, the Royal Swedish Academy announced 14 people as the winners of the 2019 Nobel Prize in the six fields of the prize: economics, physics, chemistry, medicine, literature, and peace. Who are these winners and what are their achievements?

French-American Duf lo becomes the second female economist as well as the youngest to win the prize in its 50-year history. She is 46 years old. She shared the award with Indianborn American Banerjee and Kremer, also of the United States.

The Academy said the work of the three economists had shown how the problem of poverty could be tackled by breaking it down into smaller and more precise questions in areas such as education and healthcare, making problems easier to tackle.

“As a direct result of one of their studies, more than five million Indian children have benefited from effective programs of remedial tutoring in school,” the Academy said in a statement.

“Another example is the heavy subsidies for preventive healthcare that have been introduced in many countries.”

The 9 million Swedish Krona ($915,300) economics prize is a later addition to the five awards created in the will of industrialist and dynamite inventor Alfred Nobel. It was established by the Swedish Central Bank and was first awarded in 1969.

Canadian-American cosmologist James Peebles and Swiss scientists Michel Mayor and Didier Queloz won the Physics prize for revealing the wonder of the evolution of the universe and discovering planets orbiting distant suns.

Peebles, of Princeton University in the United States, was awarded half the prize money (4.5 million Swedish Krona) while Mayor and Queloz, from Switzerland’s University of Geneva and Britain’s Cambridge University respectively, shared the rest.

“This year’s Nobel laureates have painted a picture of our universe far stranger and more wonderful than we could ever have imagined,” Ulf Danielsson, a professor and member of the Nobel Committee for Physics, told reporters as the prize was announced.

The Royal Swedish Academy of Sciences said the scientists’ research had “transformed our ideas about the cosmos.”

Mayor and his one-time doctoral student Queloz said it was “simply extraordinary” to be awarded a Nobel for what they described as “the most exciting discovery of our entire career.” The pair announced the first discovery of a planet outside our own solar system, the so-called “exoplanet”, in 1995.

“Lithium-ion batteries have revolutionised our lives since they first entered the market in 1991. They have laid the foundation of a wireless, fossil fuel-free society, and are of the greatest benefit to humankind,” the committee said. With peals of infectious laughter, Goodenough asked reporters at a hastily called news conference in London to speak up with their questions so that his “old ears” could hear.

He had not been expecting to win a Nobel prize, he said, but was “very happy” to get it. “Life is full of surprises,” he said after popping a bottle of champagne in celebration.

After Whittingham developed the first functional lithium battery in the early 1970s, Goodenough doubled the battery’s potential in the following decade. Yoshino then eliminated pure lithium from the battery, making it much safer to use.

The scientists’ work established the basis for understanding how oxygen levels are sensed by cells; a discovery that is being explored by medical researchers seeking to develop treatments for various diseases that work by either activating or blocking the body’s oxygen-sensing machinery.

Their work centres on the hypoxic response - the way the body reacts to oxygen flux - and “revealed the elegant mechanisms by which our cells sense oxygen levels and respond,” said Andrew Murray, an expert at Britain’s University of Cambridge, who congratulated the three.

Austrian writer Peter Handke won the Literature prize and Polish author Olga Tokarczuk was named as the 2018 winner after a sexual assault scandal led to last year’s award being postponed.

The Swedish Academy which chooses the literature laureate said it had recognised Handke, 76, for a body of work including novels, essays and drama “that with linguistic ingenuity has explored the periphery and the specificity of human experience.”

Tokarczuk, 57, won for “a narrative imagination that with encyclopaedic passion represents the crossing of boundaries as a form of life,” the Academy said.

Handke, a native of the Austrian province of Carinthia, which borders Slovenia, established himself as one of the most influential writers in Europe after World War II, the Academy said. He also co-wrote the script of the critically acclaimed 1987 film “Wings of Desire”.

The author of books such as “The Goalie’s Anxiety at the Penalty Kick” and “Slow Homecoming”, Handke attracted widespread criticism after he attended the funeral of former Yugoslav President Slobodan Milosevic in 2006.

Tokarczuk trained as a psychologist before publishing her first novel in 1993. Since then, she has produced a steady and varied stream of works and her novel “Flights” won her the highprofile Man Booker International Prize last year. She was the first Polish author to do so.

Though Africa’s youngest leader still faces big challenges, he has in under two years in power begun political and economic reforms that promise a better life for many in the impoverished Ethiopia and restored ties with Eritrea that had been frozen since a 1998-2000 border war.

The Nobel Committee said Abiy had won the prestigious prize for “efforts to achieve peace and international cooperation, and in particular for his decisive initiative to resolve the border conflict with neighboring Eritrea.” It said the prize was meant to recognize “all the stakeholders working for peace and reconciliation in Ethiopia and in the East and Northeast African regions.”

The Nobel Committee’s decision appeared designed to encourage the peace process, echoing the 1994 peace prize shared by Israeli and Palestinian leaders and the 1993 award for moves towards reconciliation in South Africa, said Dan Smith, head of the Stockholm International Peace Research Institute.